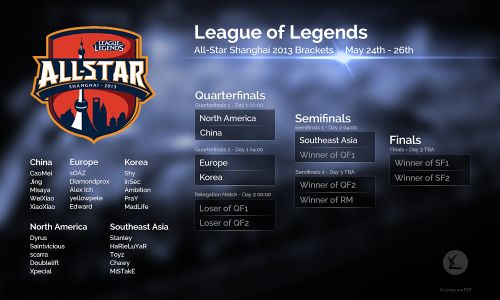 Anyone privy to the history of eSports knows two facts: Europe is the dominant Counter-Strike force, and Asia is the land of real time strategy (RTS). European team CLG.EU, now Evil Geniuses, broke through the genre barrier when they rose to the top of the League of Legends ladder early in Season 2. During Europe's rise, North America's grip on the LoL throne shrunk rapidly, culminating in the Season 2 World Championship, an event that eSports fans anticipated with bated breath. Of the eight teams in the bracket stage, an unprecedented five were from Asia: Invictus Gaming, Taipei Assassins, NaJin Sword, Azubu Frost, and Team WE. Fans of StarCraft tremble at the utter decimation that Korean teams leave in their wake, and murmurs spread throughout the League community that the same would happen to our game. Their fears were not unfounded. Frost 2-0'd the only North American team to make it to the bracket stage, Team SoloMid, in the quarterfinals (the first round). Taipei Assassins and Azubu Frost took out the two European teams, CLG.EU and Moscow Five, in the semifinals. So it was that the finals seemed to bring about Armageddon for North America and Europe: Taipei Assassins and Azubu Frost played for the championship title with the Assassins coming out on top. Asia’s reign in LoL had begun.

It is a bit odd, then, to think that North American and European fans have largely kept their focus confined to the regional LCS matches. The NA and EU players seem to be more focused on their LCS opponents than the Asian players' improvements. The All-Star tournament is a chance for any region to once again assert its dominance over the rest of the world. The Chinese team, in particular, has a roster strong enough to shake the core of any summoner. It is made up entirely of players from just two teams: Team WE and iG. Unlike the other regions where the coach has either one player from his team on the roster or none at all, Aaron, coach of Team WE, instructs three of his players on the Chinese team. It is safe to assume that the added comfort brought on by their history of working together will play out in the team's favor.

PDD spent some time on team EHome, and fans knew him best from his showings at IEM VI Guangzhou and IEM VI World Championship. Unfortunately for PDD, EHome finished in a dismal eleventh place. PDD stuck it out for another few months, finally opting to retire in March of 2012. One month later, though, he came out of retirement, joining Invictus Gaming on April 21, four days after his twenty-first birthday. Known for his chronic smoking during training sessions and lack of inhibitions when updating his fan page, PDD is a fan favorite among connoisseurs of interesting player personalities.


Not much is known about Troll yet. What is known, though, is that he is the most versatile player on this All-Star roster. Although the champions most associate with him currently are standard junglers, he did not always hold that position. Prior to joining Team WE, Troll was known as ClearLove and played AP Carry for Team Phoenix. On August 25, 2012, ClearLove transferred to Team WE, changing his name to Troll in the process. A quick look at his Leaguepedia page offers an astonishing view: of all the tournaments accomplishments listed, only one, SWL Season 2, sports less than a gold medal.


Misaya is the captain of Team WE and is also, by all accounts, the most accomplished Chinese League of Legends player. As with Troll, a cursory glance at his Leaguepedia page reveals a torrent of gold medals—fifteen of them. This number includes more gold medals from notable tournaments than any other Chinese player, including the rest of Team WE's roster. In fact, he holds more gold medals than most professional players of any region. Suffice it to say, Misaya is one successful man. His aggressive playstyle is fitting for someone so ambitious. Opting for burst champions such as Twisted Fate and Diana over sustained damage, Misaya is a terror to anyone who thinks that they can occupy the mid lane with him. It is intriguing, then, to note that Misaya did not become a professional player through his own attempts. Instead, he transitioned to LoL with his friends after playing DotA (that career was not as lucrative) and was contacted by Team WE, who at the time were looking to solidify a roster. Who could have guessed how well that offer would pay off?

WeiXiao is a cocky player—that much is undeniable. It is standard operating procedure to have the utmost confidence with at least three champions in your given role. But who in their right mind would practice all of the viable champions for their role? Or, to make matters more absurd, who would practice like that with the expectation that they could use all of those champions in tournament play? The only name that comes to mind is WeiXiao. Despite his mechanical ability as an AD Carry, the simple threat of his champion pool is enough to assert his pressure on a game. How does a team ban against him? The only counterplay to WeiXiao is to ban whatever champion counters your team comp and hope he does not catch on before it is his turn to pick. If he does catch on, it is possible that the game may be over in champion select.


There is not much to say about XiaoXiao. He started his career on Catastrophic Cruel Memory, which was bought out by Invictus Gaming on August 2, 2011. He is the only remaining player from the original CCM lineup. Known for being one of the early adopters of Elise as a support, XiaoXiao has a tendency to pick supports sporting both hard crowd control and the potential to deal damage. Though his playstyle is not unique when juxtaposed with other supports, his ability to lock down high priority targets will undoubtedly meld well with WeiXiao in the bot lane. As the two have never been on the same team before, it will be interesting to see how other teams plan to ban against and counter a duo with endlessly frightening lane composition possibilities.

Final Thoughts: Who Will Win the War?[edit]

The biggest obstacle in the All-Star teams’ paths is the Southeast Asian team, which sports two names no LoL fan can overlook: Stanley and Toyz. The pair's exploits in the final match of the Season 2 World Championship as

Orianna, respectively, are immortalized with Taipai Assassins skins for those champions. The Korean team, as well, poses a threat, albeit a slightly less immediate one. Unless North America and Europe have something hidden up their sleeve, the battle for first place could very easily come down to China, Korea, and SEA.

Click Here to return to "All-Star Shanghai 2013: A Clash of Regions".