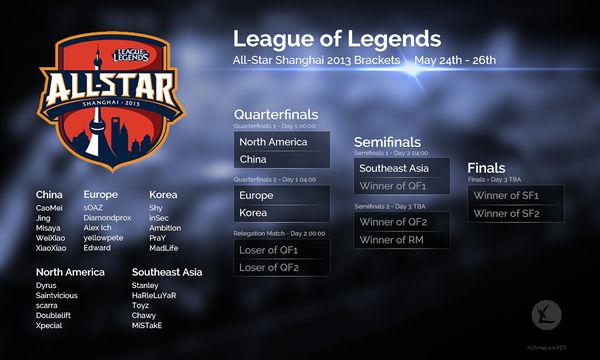 When observing the different League of Legends All-Star regions geographically or by population, the notion of Korea having a region all to itself seems out of place. Geographically, South Korea is only about 40,000 square miles in area, whereas its first-round opponent, Europe/Russia, comprises over 12 ‘’million’’ square miles. China, the only other nation to have its own region, has 1.6 billion people; compared to that number, Korea has just around 50 million. So why let a nation the size of Indiana have its own All-Star region?

Perhaps the answer lies in the popularity of eSports in Korea. Koreans have dominated the StarCraft: Brood War scene since that game’s beginning, and their stranglehold has continued onto StarCraft 2: Wings of Liberty and StarCraft 2: Heart of the Swarm. In the current World Champion Series for StarCraft 2, Korea has its own region as well, whereas the other two regions comprise entire continents (Europe and North America).

Besides StarCraft, other games like MapleStory, Counter Strike, Diablo, and such have become commonplace for Koreans -- League of Legends is no exception. After a Korean server was introduced in December 2011, Azubu made a league that became one of the most watched game leagues in the country. CJ Entus Frost, formerly Azubu Frost and NaJin Sword represented Korea in Riot’s Season 2 World Championship. Frost made it to the finals, defeating former-CLG.eu in the semifinals and losing ultimately to the Taipei Assassins 1-3 after taking Game 1.

Currently, Ongamenet Olympus Champions Spring 2013 is drawing to a close, with CJ Entus Frost, CJ Entus Blaze, SK Telecom T1 2, and MVP Ozone in the semifinals. There will be a Summer season, whose winners will get the spots to the Season 3 Championship.

When the All-Star event was announced, Korea became many people’s favorite to win the event. Though the world watched the Korean vote with interest, only registered Korean citizens were allowed to vote. The race for the top spot was fierce in some roles and a runaway in others.

Shy, 21 years old, is relatively new to League of Legends, having only played the game for a year. He replaced Locodoco in Azubu Frost after Azubu The Champions Spring 2012, and helped Frost reach the Season 2 World Championship, where his
Jax play helped them go all the way to the finals. At MLG Fall Championship 2012, he was a substitute for his sister team Blaze against NaJin Sword after Reapered left the team. His play was instrumental in shutting down MaKNooN for most of the series, helping Blaze get their hands on the trophy. His success continued in 2013 as Frost attended the IEM Season VII World Championship and finished in second place behind Blaze. Despite not obtaining the trophy, Shy was voted the MVP of the tournament, noted for his play as
Singed. Deman once declared that Shy’s Singed was doing over 950 damage per second with its poison and over 1000 with Fling.

There was some drama concerning Shy and MaKNooN during the All-Star voting. As the voting was extremely close (Shy ended up the victor by 0.1%), MaKNooN called him out on Twitter, asking for a 1v1 matchup like the one between sOAZ and Wickd in Europe. This never materialized, and MaKNooN did later go on record apologizing for his outburst. Shy heads to Shanghai, determined to show the world that it was not a mistake to pick him over MaKNooN. Whether he plays
Shen,
Rumble,
Elise, Singed, or Jax, he is sure to impress. In the Korean All-Stars Head to Shanghai video, InSec, the Jungler, stated that “I don’t have to worry about Shy because he is so strong in his laning phase”.

Strengths: Very reliable in lane, great at last-hitting under turret. Likes to play champions that deal damage but are also reliably tanky and hard to track down.

Weakness: The pressure that comes with just narrowly beating out MaKNooN. There are many Koreans and even more fans around the world who will be ready to blame the absence of MaKNooN if Korea fails to deliver. Can Shy leave all those distractions aside and play his game?

Neutralizer: As there are two other players from CJ on the team, and the Korean team seems solid, Shy should be able to remain comfortable in his role.

inSec, recently named Korea’s All-Star Jungler, used to be part of the CJ Entus team before Entus acquired Frost and Blaze. In February, he joined KT Rolster B with great expectations, and he didn’t disappoint. Often playing junglers that tend to carry harder than usual like {{ci|Zed]} and
Evelynn, he won the All-Star vote comfortably by more than 26% over CloudTemplar. Although KT Rolster B fell in the OGN quarterfinals, inSec was highly instrumental in helping his team to a 2-2-1 record. He was either targeted by other teams or left to thrive. Yes, he may not lead the KDA for Junglers, but that is because he is focused down by his opponents.

Strengths: Knows when to gank, and ganks well. Not easy to shut down. Plays consistently at a high level.

Weakness: When focused down, his team has suffered immensely. In fact, by the latter part of the OGN Spring season, teams primarily shut down inSec to defeat his team.

Neutralizer: Ambition and Shy will be able to win their lanes, which should let InSec do what he does best. As long as he doesn’t try to carry and plays smart, he should be a solid addition to the All-Star lineup.

Beating out CJ Entus teammate RapidStar for the coveted All-Star spot was CJ Entus Blaze’ mid-laner, 21 years old Ambition. Popularized by Blaze taking the IEM VII World Championship and also winning MLG in 2012, Ambition is widely regarded as the most consistent Mid Laner in all of Korea. He has been playing League of Legends since 2011, and despite Blaze losing out to Najin Sword for the chance to play in the Season 2 World Championship, he has always performed at a high level.

Ambition's
Kha'Zix play in OGN Spring 2013 has been to the level of Alex Ich of Europe, making Kha'Zix a hotly contested champion in their first round bout. He is also capable of using the usual AP mid lane champions -
Twisted Fate,
Ryze,
Orianna, and
Diana. Interesting to note is that he is one of the only known players to play
Cassiopeia and
Soraka to a degree. Additionally, Ambition has solid lane mechanics. However, like Europe’s Froggen, he has a tendency of focusing on farming too much to the point that he rarely roams. This leads to a detriment in that if the other lanes are losing early, they usually end up losing.

Strengths: Farms exceptionally well, and is used to the pressure of being asked to carry the game on a regular basis. Rarely has a bad game, and though he may die often, it’s usually a strategic death to ensure an objective for his team.

Weakness: He doesn’t roam much, and he isn’t a vocal leader. According to InSec, Ambition won’t need much help, but he won’t be the one to speak up, either.

Neutralizer: As the leadership role will probably fall to MadLife, Ambition should be allowed to farm to his heart’s content. Also, it’s not likely that this team will need him to roam, so farming wouldn’t be a bad thing after all.

PraY, from NaJin Sword, has been playing League of Legends competitively for a year. Although Locodoco of his sister team NaJin Shield led the voting early, Pray dominated near the end, accumulating about 42% of the votes. PraY is known for being aggressive and using barrier to its fullest capability. Numerous times during the OGN Spring season, he would bait his opponents in diving under the turret, following up with using an

or barrier to survive and kill his would-be aggressors. Other times, this aggression would result in him dying often, as evidenced by his 3.60 KDA during the Season, which ranks fifth out of 12 AD Carry players.
Caitlyn,
Graves,
Twitch, and
Ezreal remain his best champions. Although Cain is a reliable Support, PraY’s aggressive playstyle should coincide well with MadLife.

Strengths: Takes risks, and plays aggressively while farming up a storm. Reliable in expecting high performances from him.

Weakness: At times, gets his team in trouble when he goes too far. Also, his team lost to Blaze in the quarterfinals. Can he get past that?

Neutralizer: MadLife’s aggression should help Pray out so that they will be aggressive together.

Arguably the most famous League of Legends player in Korea, MadLife is considered to be almost a god in Korea. Whether it is due to superior skill or media hype, he did obtain an astounding 81% of the total votes, a record not matched by any other All-Star in any region. He is so highly regarded that Korean casters have coined him as “MeLaShin” (MeLa god) and have stated that his crescendos are “Merasandos”.

Known for his
Sona,
Blitzcrank, and
Thresh, MadLife is a very influential player. He also specialized in support
Lux, becoming a late AP threat in many games. In CJ Entus Frost, he is the primary shot-caller, and is expected to fulfill that role in the Korean All-Star team as well. Despite the retirement of former AD Carry and lane-mate Woong and the initiation of Hermes as his new partner, MadLife has helped Frost reach the semifinals of the OGN Spring season, where they will face their sister team Blaze.

Strengths: Plays supports that can make a difference, having used Lux and
Zyra as support champions before they became popular. He is also a vocal leader, being able to keep his emotions in check (to the point of being compared to a machine).

Weakness: Has had to learn how to play with a new AD Carry in his team, which must have been hard on him. Although Woong was blamed a lot for Frost’s losses, consistency is crucial for duo lanes.


Neutralizer: As Pray is also known as an aggressive player himself, MadLife should be able to fly with all of his aggression.

Koreans have Korean to speak, and are proud of the fact that such a small country has its own language. They should have no problem communicating to each other, which is an absolute plus against their first round opponent, Europe.

Koreans have always had the viewpoint of us against the world. They know that a lot is being expected of them, but they also know that they can handle the pressure. They will be able to come together despite their professional rivalries and work together to give the best shot that Korea can provide.

The Korean practice almost notoriously demands perfection, and hence the players spend hours honing their skills. Although sometimes viewed as harsh, it does work in the fact that those who do make it to the top are indeed the best.

Shanghai is only one time zone away from Seoul, which will be much easier to deal with than for the Europeans, who must travel early to get used to the time and the climate.

Many experts have this team as the favorites to win it all, with the Chinese and the team from Southeast Asia behind them. Can the Koreans hold up to the pressure?

Although it’s highly unlikely that they’d be so unprofessional, one can worry about the fact that these players play each other for high stakes. Blaze and Frost have a semifinal ahead of them, while Pray’s team was eliminated by MadLife’s.

When Europe and Korea collide, it should be a great match, and one that Korea is favored to win. Can the small but mighty win and prove that they are worthy of being the smallest region?

Click Here to return to "All-Star Shanghai 2013: A Clash of Regions".