Cho'Gath is a champion in League of Legends.

We're helping out Cho'Gath with some power to his primary crowd control and zoning.

Cho'Gath could use a little bit of help early on. Maxing E will help him trade more meaningfully.

Cho'Gath harkens back to the old days of LoL, and those ability particles show it. We've renovated each ability so that the Rift's biggest void murder monster can be as majestic as they deserve. 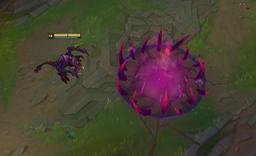 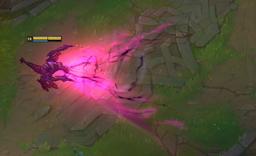 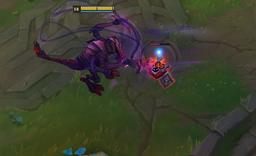 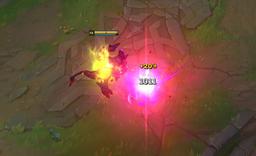 After our changes to Vorpal Spikes last patch, Cho’s damage has ended up a bit overtuned. The slow makes it easier for Cho’Gath to land the rest of his damage, so his spikes don’t need to bring quite so much pain on their own.

v7.14
E now only applies to next three attacks, but does significantly more damage. Q mana cost down. W silence duration up at earlier ranks.

In theory, Vorpal Spikes is a lot of consistent power for a melee character. In practice, Cho’Gath’s low mobility makes it a struggle to land more than a few attacks on any moving target. We’re windowing Vorpal Spikes so Cho’Gath only needs to land a few attacks to get the full value, and adding a slow to the ability to give him a better shot at doing so.

There’s always a relearning curve after we update a champion. In Cho’Gath’s case, this was more notable: few players had been picking him before the update, so there’s more learning than relearning. That being said, we think he’s slightly on the weak side even for those players who have adjusted. He is a giant monster, so we think a bit more base tankiness from Feast should do the trick.

Cho’Gath’s been pretty weak for a while now: his last visit to the patch notes back in 6.20 made Feral Scream a fairer ability to play against, but ended up weakening Cho by removing some reliability from his kit. We’re updating Feast to boost the cool aspects of Cho’Gath’s colossal, slobbering Void monster fantasy while removing the frustration of losing stacks when killed (it was a pretty terrible experience to reverse-snowball after a death). This makes Cho less of a gamble, while making tank builds feel like a good choice.

R - Feast
Changes to the rules around Feast stacks.


FOOD MEMORY : Cho’Gath no longer loses Feast stacks on death
FEED THE VOID : Feast can now stack infinitely (only five stacks can be gained from minions and non-epic monsters, though they don’t have to be the first five)
NOT THAT FILLING : Feast no longer heals Cho’Gath when it kills a unit at max stacks (nomming a sixth minion or non-epic monster doesn’t do anything beyond damage)
INDISCRIMINATE DIGESTION : Feast no longer grants two stacks on champion kill or half mana and cooldown refund on minion kill
FOOD CRITIC : Feast’s tooltip on the buff bar now tracks what Cho’s eaten

All the other stuff.

We’ve been on a slow crusade to fix League’s cone spells, and this patch we arrive at Cho’Gath. Up until now, Cho’Gath’s Feral Scream decided who to hit based on when W was pressed - not when Feral Scream actually fired. Fixing this bug means opponents can now Flash, dash, or blink away from Feral Scream, which is a pretty sizable hit to its reliability. Our goal isn’t to make Cho’Gath weaker, so we’re giving him more opportunities to yell at people, plus a little more range to offset the “walking away in a straight line” case. That said, more screams = more silence, so we’re giving Cho’s enemies their speaking rights back a bit sooner.

Cho’Gath isn’t far below the bar, but life’s still hard for a void dinosaur-terror with lobster claws. Cho’Gath has the power to wreck an entire time given his powerful CC… or die horribly, beginning an almost never-ending game of catchup to restore the health stacks he so desperately relies on to function. We’re easing up on the build-up (especially late-game) for a voidbeast fallen on hard times.

For dedicated Cho'Gath mains, Feast can be his highest high (nomming even the heartiest of meals) and his lowest low (endlessly playing catch-up on Feast stacks if he falls behind the curve). Adding extra bonuses to Feast's success case gives Cho bigger rewards for getting aggressive hungry, as well giving him the option to top off his already massive health pool once he's full.

"We're continuing our comprehensive pass at the game's older character textures. As with previous installments, our goal is to improve parity with newer releases and make sure everybody looks at home on the newly-updated Rift. Reminder: texture rebalancing isn't meant to replace - and doesn't delay - larger-scale updates! "

"We're making readability improvements to a bunch of the champion portrait icons which were added or updated over the past few months."

"Life's hard for a Cho'gath. You want to eat your enemies, they don't want be eaten, and all it takes is one little death to set this poor little monster back. These changes should help Cho get back into the fight, but we also wanted to create bigger decisions between saving Feast for a kill or nommin' down on some creeps."

"As we've mentioned previously, the splash art team is engaged in a long-term effort to update our oldest base splashes. A few more are ready to go this patch!"

v4.8
Cho can eat things a little faster and from a little further away.

"This is a change we've wanted to do for some time, given how sad Cho gets when his meals flash away. Basically this means Cho's Feast range will correctly match his attack range when he's at 6 Feast Stacks. Nom nom nom nom nom nom nom!"

v3.15
Q – Rupture
"Rupture's slow after the knockup has always been 1.5 seconds – the tooltip was just incorrect."