In February 2012, they held their first major tournament, the LoLPro.com Curse Invitational, which coincided with the launch of their League of Legends website, lolpro.com.

On August 25, 2011, the former unRestricted roster was picked up by Team Curse. Team Curse was Curse.com's first foray into the eSports scene. The initial roster of the team included LiQuiD112, DontMashMe, Doublelift, SYDTKO, Pobelter, Lapaka, Nyjacky, and Jsura.

Team Curse attended their first event at 2011 MLG Raleigh, where they took 4th place, after losing three series. The team lost the best of three series against Counter Logic Gaming 1-2, Epik Gamer 1-2, and Team SoloMid 0-2, but obtained 40 Circuit Points from the event. This placed Team Curse in 4th in the NA Circuit Rankings behind the other three teams at the event.

During Pre-Season 2, Curse reached the finals of the CSN Dawn of Champions Cup 2011 where they fell to Team WE 2-0, placing them second overall. Half a month later, Curse attended their second North American LAN, IGN Proleague Season 3 - Atlantic City, where they gained a 5th-8th placing after falling to Dignitas in the first round. Attending their first international event, Curse was one of the American invitees to IEM Season VI - Global Challenge New York where they took a 5th-6th placing, going 1-2 in the group stage by defeating v8 Esports while falling to SK Gaming and Sypher. Curse's jungler Lapaka later decided to leave the team, stating his main reason as internal conflicts with one of the team members. [1]

With the arrival of Season 2 came changes to the Curse roster, with DontMashMe leaving due to irreconcilable differences with the management and direction of Curse, and Doublelift leaving in order to pursue a career with Counter Logic Gaming Prime as their new AD carry. Despite the departure of some of their key players, Curse was still able to play in the National ESL Premier League Season 2, placing second behind Counter Logic Gaming.

After being benched from CLG, support player Elementz joined Curse on December 19. The next two major tournaments that Curse would attend were IEM Kiev and IEM Hanover on January 22 and March 10, respectively. At IEM Kiev the team went 1-3 in the group stage, defeating White Lotus but losing to SK Gaming and Team SoloMid.[2] At Hanover, Curse went 2-3 in groups and advanced to the quarterfinals but then lost 2-0 to CLG.[3][4] At IPL 4, the team once again placed 5th/6th, defeating Epik Gamer 2-0 in round one, but losing to Team SoloMid 2-0 in the second round and then finally eliminated by Monomaniac 2-1 in the loser's bracket.

In May, long-time League of Legends player and theorycrafter Thomas "SYDTKO" Oh retired from competitive League of Legends. In the same month, a three-team shuffle occurred between Curse, Dignitas, and CLG. Crumbzz left Curse because he was unable to move into their gaming house due to school commitments and joined Team Dignitas, replacing Voyboy in the toplane; Voyboy moved from Dignitas to CLG, staying in the toplane; and CLG's jungler Saintvicious joined Curse to replace Crumbzz.

On June 8, Curse picked up Westrice as their top laner, as Pobelter was too young to move into a gaming house. Curse's first competitive matches with Westrice as their top laner were at the MLG 2012 - Spring Championship, where the newly reformed team was able to place 7th/8th. On August 26, Curse won the 2012 MLG Pro Circuit/Summer/Championship, beating Dignitas in the best of 5 finals 3-2. However, both teams were disqualified by MLG and Riot for violating MLG's Official Pro Circuit Conduct Rules: "competitors may not intentionally Forfeit a Game or conspire to manipulate Rankings or Brackets." No prize money or circuit points were awarded to either teams.[5][6]

On August 20, Curse would compete in the North American Regional Season 2 World Championship Qualifier, but failed to qualify, placing 4th, losing to Counter Logic Gaming in the third-place match.

Team Curse would pick up gold in two minor tournaments in Solo Mid Series Week 4 and Solo Mid Series Week 5. Elementz would not play in these two tournaments, instead the winner of the Curse 1v1 tournament Rhux would tryout for the support position. On November 21, LiQuiD112 announced on The Morning Liquid show that they would be benching Elementz in favor of Rhux. He cited that it would give them a "better opportunity" at the upcoming IPL 5 event[8].

Curse would compete in the IPL 5 tournament in Las Vegas on the 29th of November. They would take third in the group stages, suffering defeat twice at the hands of Moscow 5, but managing to win against Blackbean from Thailand. Being knocked to the losers bracket, Curse would sweep the series against Team Dynamic, and then be forced to fight against their sister team Curse EU. They would manage to eliminate Curse EU from the tournament 2-1 to advance against Taipei Assassins. The Taiwanese team would defeat them 2-0, ending their tournament run. Team Curse placed 7th-8th at the event and took home $1,750 in winnings.

Curse started off the Spring Season of the NA LCS Spring Season strong. They didn't drop a single game, up until week 4, when they lost their first game to Dignitas. Despite that loss, and having a rough rest of the season, Curse still finished 2nd, securing their spot in the Spring Playoffs along with securing their spot in the Summer Season of the NA LCS. Despite having a roster change right before the Playoffs, Curse went on to place 4th in the NA LCS Spring Playoffs.

On the eve of the NA LCS Summer Season, Team Curse announced the huge news that they would be filling their support role by EU ex-Gambit Gaming member Edward, who was the EU LCS All Star. He would be the first player to ever in both NA and EU LCS. Despite the huge roster acquisition, Curse had a shaky Summer season, fighting hard to stay in the middle of the pack. They did end the season 13-15 in a 4th spot place going into NA LCS Summer Playoffs. They first faced off against Team Dignitas and even though winning their first game in a dominating fashion, they lost the next ones, losing 1-2, therefore having to play CLG for the 5th spot decider. Curse was unable to best them in the set losing 0-2, and were sent to relegation to play for their spot back in the Season 4 Spring Promotion.

In October 2013, it would be announced Team Curse would change its roster in a major way after disappointing results at the end of Season 3. It would include the departure of support player Edward, the last player of the original Curse lineup, Nyjacky would be moved to the reformed Curse Gaming EU roster, now named Team LoL Pro. Cop would move to a sub position while also joining the LoL Pro roster. Saintvicious stepped down from the player roster to become their coach/analyst. Curse would recruit ex-CLG support Aphromoo as their new starting AD, ex-Curse Academy mid Pobelter, ex-Curse Academy coach/jungler IWillDominate would replace Saintvicious in the jungle, and ex-coach/support for To Be Determined, Zekent. Voyboy would be the only remaining member untouched on the roster to stay in his top lane position.

The new team's first challenge would be the new organized Challenger league they were invited to, the North American Challenger League.

On October 13, Aphromoo and Pobelter were released.

October 14, Cop became the starting AD carry once again while Quas from Gold Gaming LA joined as the new toplaner as Voyboy moved to the midlane.

Curse's starting roster for the spring split consisted of Quas, IWDominate, Voyboy, Cop, and Zekent. After the end of the third week of the split, Saintvicious became the starting support in place of Zekent, and then at the end of the seventh week Saintvicious was in turn replaced by Bunny FuFuu, who dazzled fans with his Thresh play. Curse finished the split in fifth place, behind Team Dignitas and ahead of Team Coast, and they ended up passing Dignitas in the playoffs to end the season in fourth place.

On May 4, after being benched from Team SoloMid, Xpecial became the starting support for Team Curse, replacing Bunny FuFuu. The roster that played in the LCS Summer Split was Quas, IWDominate, Voyboy, Cop, and Xpecial. Curse finished fourth in both the regular season and the playoffs after beating Counter Logic Gaming in the quarterfinals but then losing to Cloud9 and LMQ.

On October 13, the team re-signs their current roster of Voyboy, Quas, IWillDominate, and Xpecial until October 20, 2015. They added former LMQ head coach Peter Zhang and sports psychologist Jim Aphremow and decide to lease office space for practice, so that the working and and living environments would be separate for the players.

Curse's starting roster going into the 2015 season was Quas, IWDominate, Voyboy, Piglet, and Xpecial. On November 7 it was announced that Curse and Azubu had ended their partnership.[9]

Team Curse was one of the fan-voted teams to IEM Cologne, along with CLG and Gambit Gaming; however, they were unable to accept the invitation to play due to visa issues. On December 13, Curse announced that Miso, now FeniX, would fill the mid lane spot on their roster for the 2015 season.[10]

On December 19, the Curse organization announced that Team Curse would move forward without bearing the name "Curse" as a title sponsor, in order to allow the organization to continue promoting Curse Voice with other LCS teams and continue to comply with LCS regulations.[11] As a result, Team Curse merged with Team Liquid.[12] See the continuation of the roster's history there. 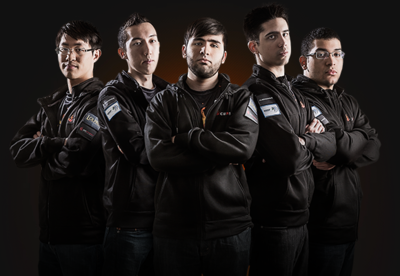 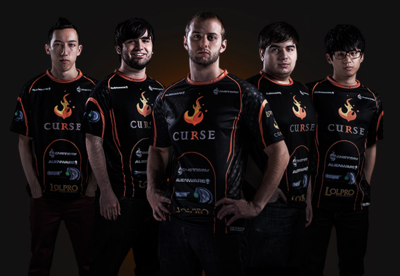 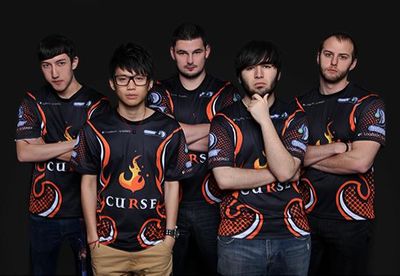