Please take a moment to fill out this survey on your gaming habits!

Each champions starts the game at level 3 with 1400 starting gold and a trinket item: the

Seer Stone which provides a short range burst of vision.

In Definitely Not Dominion, the Crystal Scar has 3 capturable points and two team specific non-capturable turrets situated on the bottom of the map. Each capture points starts as neutral and can be captured by both teams by channeling for a set amount of time. The turrets on each capture points triggers themselves as they are owned by a team, if the capture point is neutral, the turrets are put on standby (The same thing occur if an enemy starts channeling on the allied capture point). The more people channel to capture a point, the faster it gets captured.

The Crystal Scar also have speed shrines located in the middle of the map and health packs that starts spawning at 2 minutes, respawns every 30 seconds and are located near capturable points and speed shrines.

The middle of the map contains a Storm Altar which can be captured by either teams by standing on it for 1 minute (it then can't be contested during that minute). Capturing it gives you the Nimbus Storm buff which gives you 3 charges that do 4/5/6% max HP true damage on any spell or attack. In addition, while your team is controlling the Altar, every team member generates a stack of Nimbus Storm every 4 seconds while in combat. 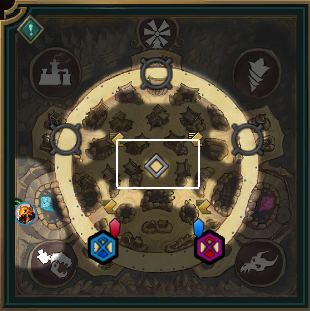 Both teams starts the game with 500 life points and fights to bring down the opposite team's life points to 0:

Once a team reaches 100 life points or less, it can only lose life points by having less capture points or when the opposite team captures Ultra Minion Relics.

Each players can additionally gain personal points that doesn't influence the flow of the game:

In Definitely Not Dominion, every players are affected by a permanent aura: