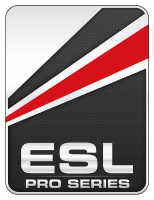 The ESL Pro Series Germany (EPS Germany) is a series of German esport events established in 2002. It features various e-Sport titles. League of Legends was included for the first time in Summer 2011, which was the seventeenth edition of the series.

In 2015 the ESL Pro Series Germany was rebranded to ESL Meisterschaft.

The most successful organization to date in League of Legends is ⁠

Five weekly cups are held, which function as the group stage qualification via a point-system. The top eight teams qualify for the group stage. The four teams that get out of the group stage compete offline in a single elimination bracket.