Champion Select is one of the most important parts of a game of League of Legends. Certain champions play very well together (have good synergy), and certain champions are very good against others (counter those other champions). It's important for each team to get a well-balanced team composition each game. Furthermore, champions in League of Legends differ greatly in the way they're played. Most players aren't comfortable playing more than a few champions within their role, and so if they aren't allowed to pick the champions that they're good at, their team can suffer.

The Champion Select format used in professional play and explained on this page is called draft pick, and is also used in ranked games. Standard normal games employ a blind pick format.

The only time champ select can be revisited for new picks and bans within the same game is if one of the champions initially picked in the game encountered a gameplay impacting or visual bug which causes that champion to be disabled for the remainder of the match or series, and can be disabled beyond that day for an indefinite amount of time. When a champion is disabled, it cannot be selected at all in the champ selection screen.

Each team gets to ban 3 champions from the available pool at the beginning of champion select. These six total champions will not be able to be played by either team that game; bans last only for a single game. Some minor rule infractions may cause a team to lose one ban in the next game.

After the first set of bans are completed, three players on each team start picking what champions their team will play that game. There is a second round of bans after the sixth champion is picked.

After the second set of bans are completed, the last two players on each team will pick the champions the remaining unpicked roles wish to play that game. There are no more bans after the picks are started with the 7th champion being locked in.

Each team picks the five champions that they will play that game. Players can pick the champions in any order they wish; after all 10 champions have been chosen, each team is allowed to swap champions between themselves. 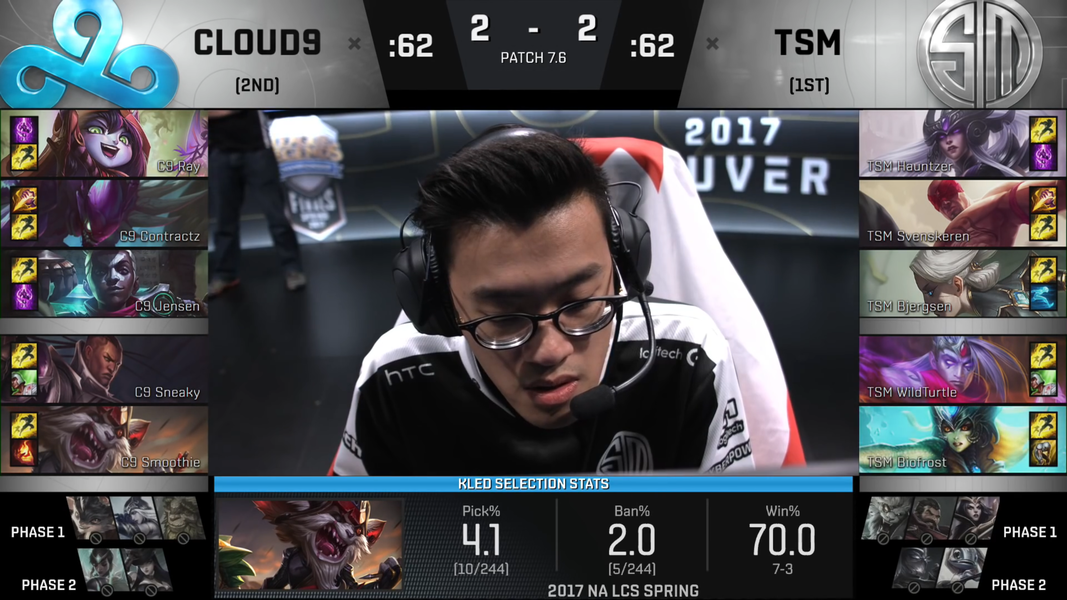 Champion Select from game 5 during the 2017 NA LCS Spring Finals between Cloud9 and Team SoloMid.

In this example, the champion select went as follows: