New To League/Gameplay/Minions and Towers 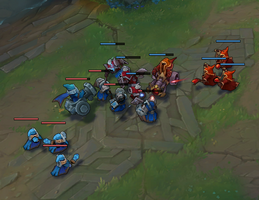 For full information on every type of minion, see here (takes you out of the New to League section).

Minions are AI-controlled units that have two ways of interacting with the map.

Generally, minions aren't very threatening to a champion, but if there are enough of them, then the champion does have to be careful. Primarily, a champion makes use of enemy minions in a positive way, because whenever you last-hit (deal the killing blow to) a minion, you gain experience and gold, both of which help you become stronger.

The process of last-hitting minions is known as farming or CSing, and the number of minion kills a champion gets is referred to as CS, short for Creep Score.

Melee minions have melee autoattacks. Three of them spawn per wave per lane. They deal less damage than ranged minions but have more health.

Caster minions (aka Ranged minions) have ranged autoattacks. They deal more damage per autoattack than melee minions. Three of them spawn per wave per lane.

Siege minions (aka Cannon minions) have ranged autoattacks. They deal more damage than caster minions and are also tankier than melee minions, but they don't spawn every wave. Cannon minions take reduced damage from turrets. If a team destroys an enemy inhibitor in a particular lane, then that lane's cannon minions will no longer spawn, and super minions will spawn instead.

Voidspawn minions are spawned exclusively from the item
Zz'Rot Portal. They act like other minions, but their health decays automatically over time, and they totally ignore enemy champions. 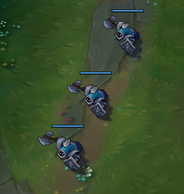 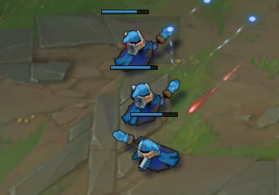 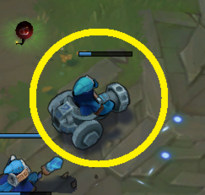 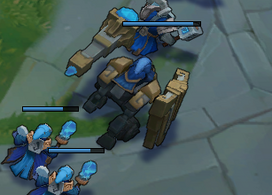 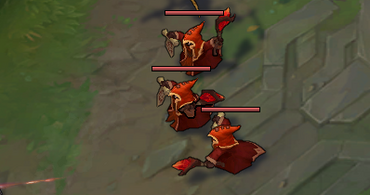 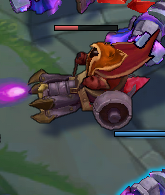 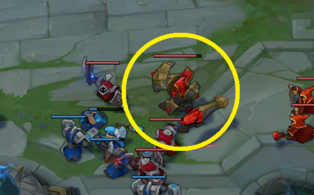 Structures are AI-controlled units that have no way to move. There are three types of structures: towers, inhibitors, and the nexus. Look here for a list of structures, with their locations highlighted on the map.

There are 22 towers on the map, 11 per team. Each team has 3 towers in each of the 3 lanes and 2 more towers defending their nexus. As illustrated here, each lane has an outer turret, an inner turret, and an inhibitor turret. These can also be referred to as tier 1 (outer), tier 2 (inner), and tier 3 (inhibitor). "Turret" and "tower" are synonyms.

There are several words that all mean the same thing, which is to deal enough damage to a tower to remove it from the map: 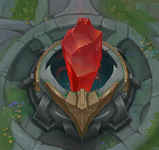 Inhibitors have no ability to interact with the map. There are 6 on the map total: 3 per team, 1 per lane per team. See locations highlighted here. Once an inhibitor is destroyed, the team that destroyed it starts to have super minions spawn in the lane in which the inhibitor was destroyed. Super minions are much more dangerous than other minions. Destroying all three of the enemy's inhibitors results in an extra super minion being spawned in each lane per wave.

Like towers, inhibitors can be attacked by minions and also by champions using basic attacks. There are no spells that interact with inhibitors. If an inhibitor loses health, it starts to regenerate health slowly.

If a champion last-hits an inhibitor, they gain 50 gold; there are no other benefits associated with killing an inhibitor (aside from the super minions). 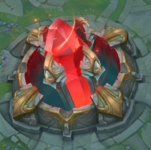 The nexus, like the inhibitor, is a defenseless, stationary building that has no way to interact with the map. When a team's nexus is destroyed, they lose the game.

More Info: The nexus is only targetable when both nexus turrets are destroyed, and also there is a currently-destroyed inhibitor in one lane (it doesn't matter which lane). The nexus can be hit by minions and also by champion basic attacks. Last-hitting the nexus gives 50 gold to a champion and also ends the game. The nexus regenerates health over time. If an inhibitor respawns, the nexus becomes untargetable, but its health regeneration is unaffected. Spawning a turret with
Azir's

Sun Disc on a nexus turret spot will NOT make the nexus untargetable.