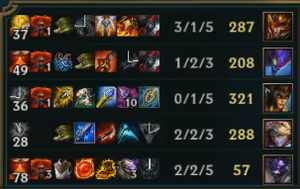 A screenshot of a spectator stream overlay showing champions' items. The leftmost slot is for trinkets only.

Here we will go over some of the more common items in League of Legends, particularly those that have activatable effects. You can see the icons of the items that a champion has in the spectator overlay, but those don't mean much if you don't know what to look for. Fortunately, in streams of professional games, the champions will always be in the same order top-to-bottom: Top, then Jungle, then Mid, then Bot, then Support.

The items that a champion builds are collectively called that champion's itemization or simply item build. The verb form meaning to choose what items to buy is to itemize.

Each champion has six item slots. In almost all cases, each item takes up its own item slot, but there are some exceptions for consumable items of the same type being able to all occupy the same item slot. The set of item slots, and the items that occupy them, are known as the champion's inventory.

It was discussed briefly here, but there are different tiers of items. Basic Items are bought in one piece from the shop. They can then be combined together (with an additional price for the combination) into Advanced Items and finally Finished Items. That price for the combination is sometimes known as a recipe, and the tree of items that are combined together to make a higher-tier item is known as a build path. Build paths are all unique. It is possible to buy Advanced or Finished items all at once; the components do not need to be purchased individually.

If following the links in this section, please note that not all of those items are available on Summoner's Rift; other game modes have some items that are unique to them.

It is recommended to follow links to the items listed on this page to see build paths and figure out what basic tier items give what stats.

If you watch any amount of competitive League of Legends, you will hear a lot about wards. It is only possible to buy

Control Wards although different kind of wards are available through trinkets.

The number of wards that a champion can have on the map is limited to three green wards (aka Stealth Wards aka Sight Wards) and one red ward (aka Control Ward) at a time. See more on red wards vs. green wards here.

There is another class of item called a Trinket. Each champion has the ability to have exactly one trinket at a time, which is separate from the six normal item slots, and trinkets can perform different vision-related tasks. See more about trinkets here.

Some items can only be used once and are then removed from the inventory upon consumption. These types of items are generally referred to as consumable items. Others have charges, or "stacks", that can be consumed and then regenerated via different mechanics.

Common items in each role[edit]

Usually, every jungler builds one of the three following items:

The three smite enhancing items can also be enchanted:

As the role of "jungler" encompasses a wide variety of champions with different playstyles and goals, jungler item builds can vary significantly. Some will build similar to toplane tanks (usually after building Cinderhulk), some will build like mages (after going Runic Echoes), and some will build like AD assassins or bruisers (after a Bloodrazor or Warrior enchantment). Check out other sections for common builds to see.

If the champion revolves around magic (often ranged):

If the champion revolves around tanking (often melee):

Movement Speed is an important stat in League of Legends, and boots are the most efficient way to improve it. So pretty much every champion will buy boots at some point.