For full information on every type of monster, see here (takes you out of the New to League section). On the map, in between the lanes, is what is known as the jungle. In the jungle, there are several clusters of AI-controlled units that aren't affiliated with either team. Each such unit is known as a monster or neutral creep or jungle creep. Each cluster of monsters is known as a jungle camp or just camp. Two of the types of camps are special and are known as buffs because they grant the champion that kills them a major buff. There are also special effects associated with using the summoner spell

Smite on some creeps. Continue reading for more details. See here for locations of jungle camps.

Dividing the jungle is a river, and in the river there are a few more neutral creeps: Dragon, Baron, and Rift Scuttlers. Dragon and Baron are called objectives. Rift Scuttlers are in a class of their own.

All of the units in a camp will spawn at the same time, and the camp will not respawn until the camp has been cleared (i.e. all units that belong to the camp have been killed). The strategic value of different jungle camps varies greatly. 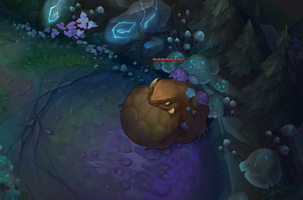 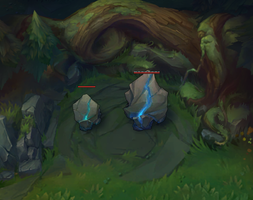 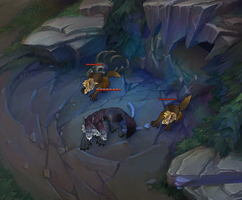 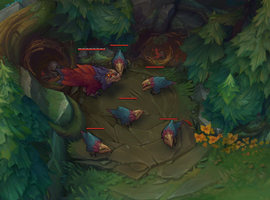 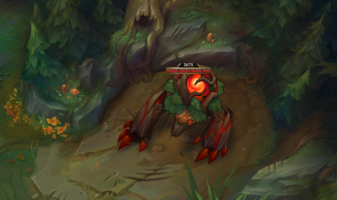 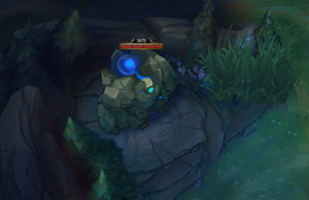 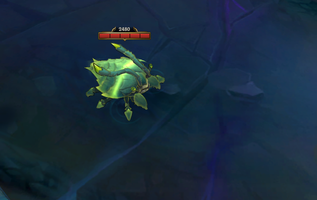 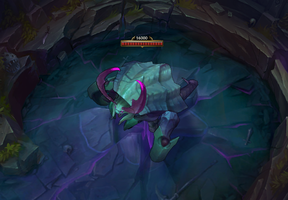 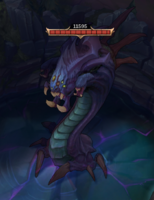 Plants are destructible objectives on the map which provide immediate benefit to the player that attacks them. Plants can be used in a variety of ways, including taking them away from the enemy team by clearing them whenever they are available.

Red Buff and Blue Buff, or Red and Blue for short, are strategically very important in almost all games in almost all phases of the game, but primarily the early and middle game. When each one is killed, it grants the killer a buff for two minutes (2m18s with the mastery Runic Affinity). If the bearer of Red or Blue is killed by another champion, the buff will be transferred and the duration will be refreshed for the new bearer.

Smite the Red Brambleback, you instantly regain a large chunk of your maximum health (can't go over 100%).

Blue Buff (technically called the Crest of Insight) is granted by last-hitting the Blue Sentinel (generally also referred to as Blue Buff or Blue). The Blue Sentinel spawns with no other minions. If you

Smite the Blue Sentinel, you gain a large chunk of health back for yourself (cannot go above 100%). Blue buff grants its bearer four benefits:

Krugs, Wolves, and Raptors each have one "greater" creep at each camp, and the rest are "lesser" (there is only one Gromp total at each camp). You can tell which is which because the greater ones are physically bigger. Killing the greater monster gives significantly more gold and experience than killing the smaller ones does. Using

Smite on the big one also will give a large chunk of health back to the jungler that used it.

There is one Gromp at each camp. Prior to season 5, Gromps were known as Wights.

There are two Krugs at each camp, one bigger than the other. Prior to season 5, Krugs were known as Double Golems. Krugs will split into two smaller krugs when they are killed. A total of ten Krugs can be killed at this camp, with the large Krug splitting 2 times.

There are three Wolves at each camp, one bigger than the others.

There are 6 Raptors at each camp, one bigger than the others. Prior to season 5, Raptors were known as Wraiths. Raptors are the hardest camp to take early on because of their combined health and damage, but they provide the most experience if all cleared by the same player.

In between a major objective and a small camp, the Rift Scuttler belongs in a category of its own. It is the only neutral unit that is not stationary by default. It is also the only neutral unit that will not fight back when attacked; instead it will attempt to run away from its attacker or attackers. There are two Rift Scuttlers on the map, one that roams along the top river, and one that roams along the bottom river.

When a team kills a Rift Scuttler, a Speed Shrine is created in front of Dragon (bottom river scuttler) or Baron (top river scuttler). Speed shrines are affiliated with one team only and provide two benefits:

Dragons (technically drakes and Elder Dragon) are one of the major objectives of the entire game - Drakes early on, and Elder Dragon in the late game. Often "Dragon" and "Drake" are used interchangeably. The dragons all spawn in the same place, the Dragon Pit, which is located here on the map near bottom lane.

Killing a Drake permanently grants the team one of the

Dragon Slayer buffs, depending on the type. The types are:

Other information about Drakes:

If a Drake is alive at 35 minutes, it won't automatically despawn, but only Elder Dragon can spawn after 35 minutes. Elder Dragon respawns 8 minutes after being killed, and it is comparable in difficulty to Baron Nashor for a team to kill.

Killing one Elder Dragon grants the entire team a temporary buff called Aspect of the Dragon that is stronger the more Drakes that were taken by that team earlier on in the game. 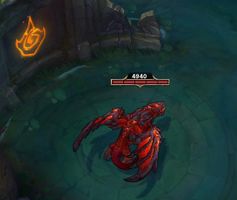 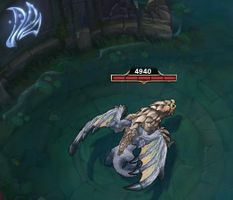 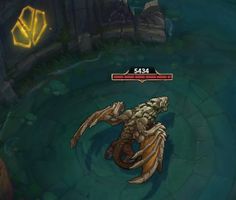 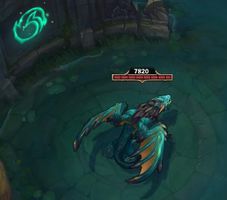 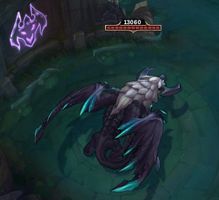 The Rift Herald is an epic monster that only appears at 6 minutes and then disappears a few seconds before 20 minutes to give its place to Baron Nashor. Slaying the Rift Herald spawns a Relic that can only be picked up by the killer's team. Picking up the Relic gives its bearer the Eye of the Herald buff. The Rift Herald has several strengths and weaknesses:

A champion with the Eye of the Herald buff has Empowered Recall (clicking will take you out of the tutorial section) until the Eye is crushed. Additionally, the champion will be able, after a brief channel, to crush the Eye, summoning the Rift Herald as an aide to siege enemy turrets. The buff lasts for 4 minutes and is retained through death. The Eye replaces said champion's trinket until its crushing or expiration. 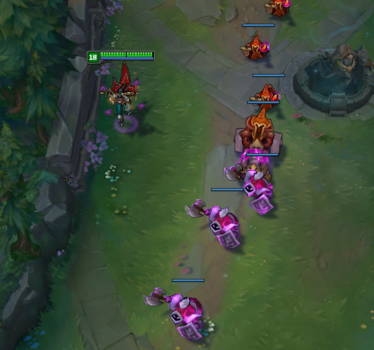 Baron is the major objective of the late game. It is very dangerous and difficult to take for a team that does not have a lot of vision control near the Baron pit or that isn't far ahead for several reasons:

When killed, Baron grants a significant amount of gold and also a buff (called Hand of Baron but usually referred to as Baron Buff) that lasts the next three minutes to everyone who is currently alive on the team that kills it (gets the last hit on it). See its location on the map here. Baron Buff cannot be transferred from champion to champion under any circumstances.