This is where the metagame comes in. Briefly, the metagame is an evolving set of strategies that the League of Legends community as a whole currently believe to be the best way to play the game. The metagame is constantly evolving for two reasons: Riot changes the game regularly (through patches), and also competitive teams and individual players make discoveries of particular champions, item builds, or strategies that are better than the current metagame and others adopt those discoveries.

Understanding the League of Legends metagame completely requires hundreds of hours of playing and/or watching streams of professional play. We're just going to go through the basics.

Read more here. Typically, each team will have each of their five players playing a champion that fits into one of the five roles: Top laner, Jungler, Mid laner, Bot laner, and Support. Within each roles exist several different classes and different viable champions that vary depending on the Meta. Over the years, only the Bot Lane role has been quite stable but, it is still subject to changes.

Phases of the Game[edit] 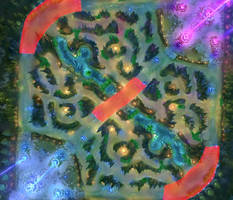 Top, mid, and bot lane in between the two outer towers, where champions tend to spend most of the lane phase.

The beginning of the game is called laning phase, named that way because most champions stay in lanes trying to gain experience and gold in order to become stronger. They do this by trying to kill minions (last-hitting) and, at the same time, trying to stop their opponents from doing the same.

In the standard setup, four players will be laning: One in top lane (the top laner), one in mid lane (the mid laner), and two in bot lane (the bot laner and support). The fifth player, the jungler will be roaming around the jungle farming monsters and ganking lanes.

Early game, the Dragon is a major point of contention. Teams will try to set up vision control around the Dragon Pit and kill Dragon when the enemy team is unable to contest it.

Sometimes you will see champions, particularly mid laners, leaving their lane to go to other parts of the map to do something, usually to gank another lane or fight over Dragon. Leaving one's lane during laning phase is referred to as roaming.

Note while this is the "standard" way of playing the game, in competitive play you will normally not see this exact setup. Read about lane swaps here.

After a couple of towers are taken (AKA destroyed AKA killed AKA pushed down), players will start to roam from lanes more and more, and teams will start to group (i.e. assemble as 4 or 5 in a part of the map). Sometimes the top laner will stay in a side lane (top or bot) and continue to farm creeps and attempt to get damage onto turrets. This is referred to as splitpushing, because the laner is split from the rest of his team and trying to push a lane.

The primary focus of teams in the midgame is generally to try and push as many of the outer and inner turrets as possible, and take as many Dragons as possible. Some teams will want to force teamfights, which are huge fights involving many members of both teams. Others will want to just try to play defensively and wait for late game; some team compositions are very weak in the midgame and just want to wait for lategame, when their champions have 3 or 4 completed items before fighting. See Win Conditions for more information.

The turning point of the midgame into lategame is somewhat nebulous, but generally by about 30 minutes the game is considered "late." Champions generally have finished at least three complete items and are working on building towards their fourth or fifth. The focus of the game starts to revolve more around Baron and the Baron Pit, as teams attempt to get vision there and deny vision from the enemy team. Teams will start to try to siege and take inhibitor turrets and then the Inhibitors themselves.

As the game progresses, death timers get longer, and so a single death becomes much more detrimental to a team; for this reason, champions will almost stay grouped together as a unit of 5, unless one of them is split-pushing.