Welcome to patch 7.13, the one where Honor makes a comeback! At the end of every game you’ll be able to honor one of your teammates with one of the new categories. GG? GG! <3

We also have the regular balance changes; toning down Galio a bit, giving Gnar some love, reining in a certain electric rat, and sharpening the edges on both Kindred and Rek’Sai.

Closing it up, did you know we have new tips for the loading screen? We've also got a way to track your vision score during the game, and the SKT T1 skins are here!

See you on the Rift,


BUGFIX : Aurelion Sol's stars are no longer visually misaligned with their actual area of effect while W - Celestial Expansion is active

For someone who spends so much time counterjungling, it's frustratingly difficult to punish Nunu for crossing enemy lines. (He's also, to be clear, too strong in general.) Even when enemies catch the Yeti in the act, Nunu's usually sitting on enough health to survive the counterattack as he skates away to freedom. Given how much Consume contributes to the health of Nunu's clears, he doesn't need so much safety baked into his base stats.

Zac's a champion meant to have extreme high moments if he can navigate the unreliability of his abilities. Right now, Stretching Strikes' second hit is giving Zac so much extra reach that those "inconsistent" high moments are less the exception and more the norm. We're tuning that range down so Zac's impact isn't so guaranteed.


BUGFIX : When Mini Gnar E - Hops off another unit, he can no longer change the direction of his jump by casting Q - Boomerang Toss


BUGFIX : Fixed a bug where, if Rakan was interrupted during W - Grand Entrance's dash, he became unable to use Flash until re-casting Grand Entrance

Honor has been given a complete overhaul. You’ll see a new voting screen, the addition of a persistent Honor level, and rewards for consistently honorable play. Honor will be activated at some point during the patch. Read the full primer here.

POST-GAME CEREMONY : If the majority of your team honors you, you get a shoutout for the whole lobby.
HONOR LEVELS : Everyone starts at Honor level 2, and consistent honorable play unlocks an evolving Honor level, displayed on the profile page. You will move up even if you are not honored, providing you’re always playing to win.
BOOSTED : If a full team all participates in the Honor vote, everyone on that team will receive a small boost to their Honor level progress

KEY FRAGMENTS : Key fragments will drop exclusively through Honor. As long as you’re at least level 2 (the starting level) you’ll continue to receive the same amount as now. and these will drop outside of the post-game screen, or on login.
HONOR CAPSULES : After level 3, you’ll receive Honor Capsules as well as key fragments. These don’t require a key to open, and contain at least two key fragments. Some also contain champ shards and exclusive rewards like Medieval Twitch and Grey Warwick skin permanents.

Galio’s throwing his weight around a bit too well, so we’ve got a few changes to help opponents go toe to toe with the big guy in lane. First, we’re reining in his ability to instaclear waves without speccing into damage. Second, we’re making him more vulnerable to physical damage, given his niche is the anti-magic tank. Finally, we’re giving opponents a larger window to knock Galio down when he tries to Hero’s Entrance Exit a hostile gank.

Gnar’s having trouble getting the job done, both as a lane bully in Mini form and a teamfight initiator in Mega form. In Mini Gnar’s case, Boomerang Throw could pack a harder punch as his primary means of whittling skittish enemies down and out of lane. Mega Gnar by contrast already has the raw power necessary to wreak havoc on his foes, but needs help getting into range to use those tools. These changes together help Gnar regardless of which hat he’s currently wearing.

As a basic-attack-focused mage, Kennen has access to both physical- and magic-damage focused builds. Choosing between them affects the strengths Kennen brings to the table: the physical build gives him more consistent, unrelenting damage, while the magic build makes him a burstier threat to deal with. In theory. The balance between these builds is off-kilter: AD Kennen's sustained damage is actually pretty bursty, and AP Kennen isn't bursting hard enough. We're giving AP Kennen better scaling, but our work on AD Kennen's a bit more nuanced. Primarily, we're removing Electrical Surge as a repeatable damage spike in the physical build. Surge’s AD scaling is down, and in the (usual) case where Kennen picks up Runaan's Hurricane, it no longer triples Electrical Surge's stack rate. The nuance is in the ratio switch from total AD to bonus, a change meant to mitigate the impact to bot lane Kennen, who we’d like to keep viable as a niche strategic option. Switching to bonus AD removes the innate disadvantage bot lane Kennen faces with total AD scaling (bot laners are generally lower-level than solo laners, so their base AD hasn’t scaled as much) while letting us make a smaller ratio reduction than if we had stuck with total AD.

While getting each of Kha’Zix’s ability evolutions to at least niche appeal has been a juggling act as long as he’s existed in the game, Evolved Active Cloaking is currently in a pretty unpickable state. To remedy this, we’re making it easier for KZ to chain-stealth through multiple brush patches with R’s evolution, closing greater distances unseen. To make space for the buff, we’re reducing Q’s damage outside of Isolated situations (where it’s actually stronger! Something something strategic identity.)

Since their update, we’ve had more time to assess Kindred's power and there was potential to give them a little bit more power throughout their kit. First we have the marks - as the game progresses, it gets harder to acquire marks, which makes it even harder for Kindred to access their bonus range, so we're easing the curve on the passive a bit. Additionally, early trades were still a bit on the weak side and Wolf attacks during Wolf's Frenzy didn't feel meaningfully more powerful with each successful hunt.

Passive - Mark of the Kindred

Maokai is on the doorstep of finding his home on the Rift, so we’re giving him the keys to unlock what the Twisted Treant is supposed to be doing more often and more successfully.

Midseason left some tanks with less damage than they need to function. A little bump to Poppy’s bread and butter skill should go a long way toward bringing her back.


SO FRESH SO QUEEN : Spells queued while attacking are handled better

RATIO : [1.6 bonus attack damage] ⇒ 1.85 bonus attack damage
HUD PING : Void Rush can now properly be HUD-pinged to display its cooldown or readiness, regardless of whether a marked target is in range
GREEN CIRCLE : Void Rush’s cooldown availability now displays accurately for allies in the HUD
SPECTATOR NOISE : Prey marks no longer show up for spectators

Shaco isn’t getting to live out his assassin fantasy, instead playing as a “sort of tanky fighter with some dashes and a slow that allows him to stick to one target and stat check them to death”. We want him to feel more rewarded for building damage and stabbing people.

For a champion who excels at split-pushing and dueling his laner, Trundle’s Chomp not applying to turrets is just unintuitive. We’re adding that interaction back in, and taking the time to clean up the way Chomp works.

INCREASED HEALING AND REGENERATION : [20%] ⇒ 25%
BUGFIX : Was already giving 25% increased lifesteal. We’re “fixing” the bug by bringing other sources of healing/regen up to the same level.

After last patch’s changes, we figured we could make Xayah feel a little bit smoother to play as the game progresses.


YEAH : Rammus’s dance moves are so sick they scale with movespeed.

You’re not hearing things! ...well, technically you are, but…. Yeah! Audio updates!

Abyssal Mask
Now builds from Catalyst of Aeons instead of Spectre Cowl.

(We’re leading in with a bunch of words about stuff that’s not Abyssal Mask, but trust us, we’re going somewhere with it.) Doran’s Ring stacking had created an unhealthy pattern in lane; waveclear from a distance, get all of your mana back, repeat. However, its removal leaves some tanks feeling like they don’t have items that support their laning patterns at all. Catalyst of Aeons is a solid paradigm for in-lane sustain, but tanks don’t feel great about the items it builds into, especially now that Righteous Glory no longer builds out of it. So that’s one side of things. On the other hand, Abyssal Mask had been underperforming, and we were looking for ways to make it a more palatable item. And that leads us to our changes. Abyssal Mask’s passive is a natural fit for tanks. Tanks need an item that builds out of Catalyst of the Aeons, and we just put the two ideas together to make the new Abyssal Mask.

Adaptive Helm isn’t quite providing the raw oomph it need to be a competitive defensive item, so we’re buffing the tankiness it provides just a bit.

The Coin line is underperforming to a pretty significant degree. Hence, buffs.

Nomad's Medallion, Talisman of Ascension & Eye of the Oasis

Cinderhulk is lagging behind the other jungle items at the moment, so we made some changes to jungle upgrades and Bami Cinder to help smooth out clearspeed - especially early on - for tank junglers.

Tanks don’t have a very smooth item progression in the jungle. If they have a good first gank and a solid clear, they sometimes back with enough gold to pick up Bami’s Cinder. But most of the time, they’re stuck sitting on a Ruby Crystal while other junglers get to keep picking up small components (aka Long Swords for days). Worse, health doesn’t do anything for clear speed, so while tanks are trying to farm Cinderhulk, everybody else around them is already farming more quickly - thanks to those aforementioned small components. On top of that, Bami’s Cinder’s monster damage isn’t very powerful, which only amplifies the problem.

Herald should be immediately more rewarding to the individual who kills her. 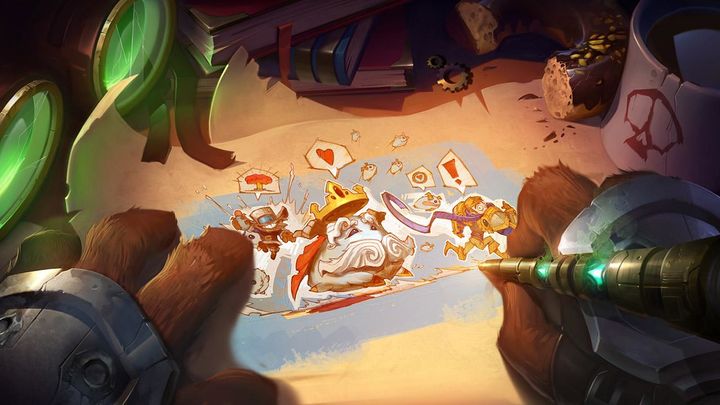 Use Poro Toss to bowl your friendly poro across the map. If it hits a target, activate Poro Dash to dart toward your opponent. Once a team lands 10 Poro Tosses against enemy champions, the Poro King is summoned. Any ally can join His Royal Highness’s side by activating To The King! Until defeated, the Poro King heals you, boosts your mana regeneration, and helps siege enemy towers with his majestic poro-splosions. Thank the Poro King for his assistance (and boost his power) by feeding him Poro Snax.

May you always bowl straight and true, and may you be fast-footed to avoid those fluffballs.

THE TECHNOLOGY IS HERE : Different tips will be displayed to different people based on their level. We added more than 120 tips! Try to catch’em all.

Vision score is now displayed on your trinket tooltip.

The following skins will be released during patch 7.13: 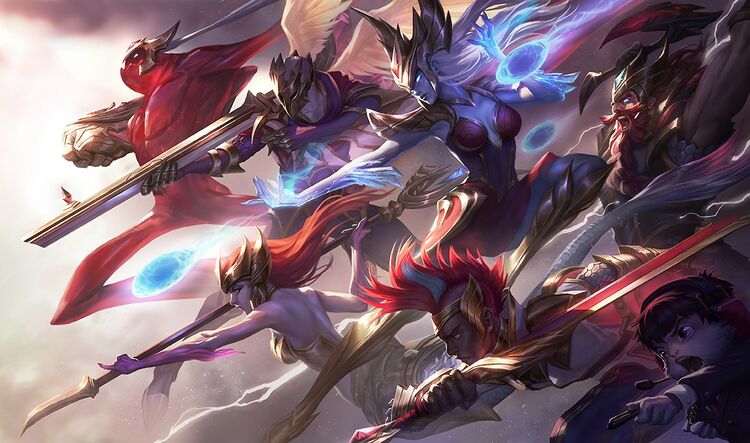 Ascend to Challenger with the new SKT T1 skins! ...Well, at least try to.