SUPA HOT CREW is a European League of Legends team originally set to participate in the 2015 Spring Split before being acquired by MeetYourMakers.

During the 2014 Season Spring Promotion Round Robin, SUPA HOT CREW XD beat Kiedyś Miałem Team and TCM-Gaming, and they advanced to the final stage of the Promotion Tournament with a 3W-2L record. SK Gaming then chose the crew to be their challenger for the LCS spot. The crew initially had a 2-0 lead, but SK Gaming mounted a furious rally and edged Migxa and his teammates with a 3-2 overall score.

It seemed all but lost for the team, as they prepared to participate in the Coke Zero Challenger League. However, Riot Games ruled Lemondogs out of the LCS and organized a play-in between LCS Promotion Qualifier participants. With Ninjas in Pyjamas having technical issues, the play-in was shortened into a Best-of-3 series between SHC and MeetYourMakers, which Mimer and his teammates took 2-0.

Upon reaching the LCS, the team elected to form its own organization, SUPA HOT CREW.

Despite picking up new additions MrRalleZ and Impaler before the split and SELFIE mid-split, the Spring Split was not a success for the team, placing 7th overall. Despite this, Migxa managed to win the Weekly MVP award for week 5. Their performance in the split meant that they would have to play in the Summer Promotion Tournament and fight for their spot in the Summer Split. SUPA HOT CREW beat Cloud 9 Eclipse in their promotion match, securing their place in the next split.

The Summer Split was a huge improvement on the previous split, with SUPA HOT CREW fininshing 3rd, behind Alliance and Fnatic. wewillfailer joined before the split, but was replaced by KaSing half-way through. SELFIE managed to pick up the weekly MVP award for week 10 for his individual performances. The whole team performed extremely well over the split, and their performance landed them a place in the Summer Playoffs. The team lost to Team ROCCAT in the quarterfinals, but winning their 5th place match against Millenium meant that they would be sure of their place in the 2015 Spring Split. Just months later, Impaler left for Coast and KaSing left for Gamers2.

On December 8, SUPA HOT CREW's roster was acquired by MeetYourMakers. 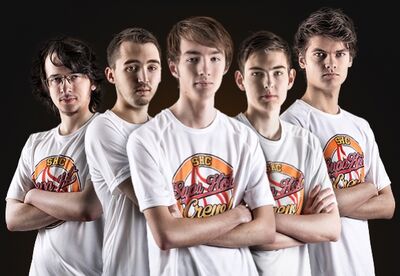