Samsung White was a Korean League of Legends team sponsored by Samsung Electronics. It was formerly known as MVP Ozone.

In September 2013, the major electronics corporation Samsung announced they would acquire the OLYMPUS Champions Spring 2013 champion team of MVP Ozone to sponsor in League of Legends. The team had already qualified for the Season 3 World Championship as well.

Despite a roster swap moving Homme to the sub position and starting Looper right before the tournament, Samsung Ozone were expected to perform well at the World Championship, with the attention that the Korean scene was getting globally. They were placed in group B along with Fnatic, Gambit Gaming, Team Vulcun, and Mineski. Both they and Gambit finished the group stage with a 5-3 record, and they were tied 1-1 in the head-to-head matchup, but Ozone lost the tiebreaker match and were eliminated from the tournament; Fnatic and Gambit moved on to the quarterfinals.

After their poor performance at Worlds, Ozone went on to perform very well in OGN, placing second in the winter season behind SK Telecom T1 K (who went undefeated the entire season). Then between the winter season and spring season, the organization swapped the midlaners of its two teams: PawN joined Ozone from Samsung Blue, and dade left Ozone for Blue. The roster swap proved favorable for both teams, and in both the spring and summer seasons, Ozone and Blue both advanced to the semifinals; both times Blue defeated Ozone; and both times Ozone won the third-place match.

With 525 circuit points at the end of the summer season of OGN, Samsung White and SK Telecom T1 K were tied for the second slot from Korea going into Worlds. At the Korean Regional Finals, they played a tiebreaker, which Ozone won 3-0.

Going into the 2014 Season World Championship, White and Blue were the two favorites to win the tournament. White went undefeated in their group, beating EDward Gaming, ahq e-Sports Club, and Dark Passage all 2-0 in the double round-robin. In the bracket stage, they beat Team Solomid 3-1 in the quarterfinals, then their sister team Samsung Blue 3-0 in the semifinals, and then won the finals 3-1 against Star Horn Royal Club. Only dropping two games the entire tournament, White were crowned World Champions and won the $1,000,000 prize. 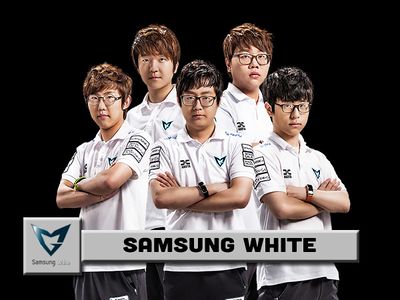 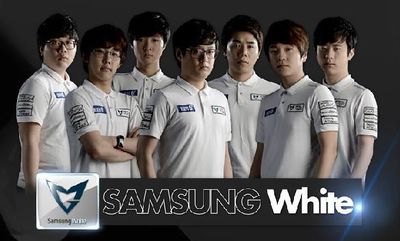