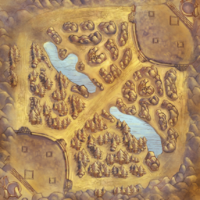 The Summoner's Rift is the premier and most commonly played map in League of Legends.

The oldest and most venerated Field of Justice is known as Summoner’s Rift. The Rift is located in a remote forest between Freljord, the Serpentine River, and the Ironspine Mountains. The Summoner’s Rift is one of a few locations in Valoran where magical energy is at its greatest concentration, making it a highly sought after locale to pursue magical endeavors. Historically, the forest where the Rift resides was the site of several battles during Runeterra’s various Rune Wars. In modern times, this battleground is known as the ultimate proving ground for any aspiring summoner. The Rift is also the battleground where some of Valoran’s greatest political decisions have been made since the inception of the League of Legends.[1] 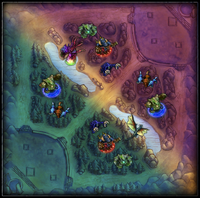 The objective of Summoner’s Rift is to destroy the enemy’s nexus, which located in its team's base. Two teams, the Blue Team on the bottom-left corner, and the Purple Team on the top-right corner, start the game each with five champions, who must battle down one of three different lanes in order to assault the opposing team's champions and structures. Each lane is traversed by minions and defended by numerous turrets, each of which must be eliminated in order to gain access to that team’s main base and inhibitors. Other features include the river halving the map diagonally, and the jungle between the lanes, populated by neutral monsters that players can exploit for on-kill bounties.

v3.12
Context: Turns out towers have some pretty complex mechanics! Instead of forcing players to earn cryptography degrees to figure them out, we decided it might be best to add items to towers that explain their nuances.