The Sypher League of Legends team was created in 2011. They first came to prominence at IEM New York where they placed third overall.

Team Sypher's League of Legends team was first formed on June 19 of 2011, when Sypher acquired the roster of Avec Le Style, consisting of JothY, Arcagod, Vinc3d, Nervous, and Skyyart.

The coming months would mark the departure of two of Sypher's staple players, with ALth0r and JothY leaving on October 26 and November 11, respectively.

Eleven days after the event, Sypher would be invited to participate in the Kings of Europe tournament. Placed into Group B, Sypher would take second place by eliminating against All authority and FnaticRC while falling to Counter Logic Gaming EU. Despite their moderate success in the gorup stage, Sypher would fall to Moscow Five 1-2 in the semifinals and Team Mistral 1-2 in the third-place match, ending the tournament with a fourth place finish.

On February 28 of 2012, Sypher would undergo some roster changes with Pyri departing from the team and Lyumi joining to fill the spot.

Over the next few months, Sypher's roster would undergo more changes, first with ShLaYa leaving to be replaced by Kikis. On April 1, team captain and founding member Skyyart would leave the team. Four days later, ImSoFresh would join the team.

With their new lineup, Team Sypher would take first at the Gamers Assembly 2012. In the event, Team Sypher would most notably defeat Natus Vincere, Counter Logic Gaming EU, and Absolute Legends twice, both in the winner bracket finals and the grand finals of the tournament. Sypher would show a dominant performance, not once falling to the loser's bracket the entire tournament.

Despite their strong showing at Gamers Assembly, ImSoFresh would leave the team ten days later. To fill his spot, Sypher would add hyrqBot on April 27 of 2012. Not long after, Kikis would depart from the team, joining exHCL Gaming. 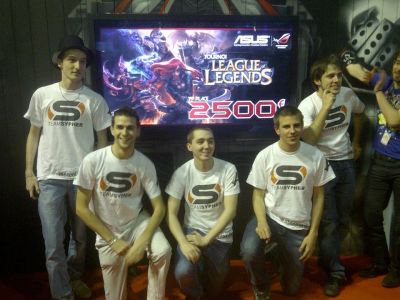