Taipei Assassins, or TPA, was a competitive League of Legends team based in Taiwan. After their victory at the Season 2 World Championship, TPA was hailed as one of the strongest teams worldwide. Taipei Assassins is the sister team of Taipei Snipers.

While playing in the League of Legends ranked solo queue ladder, AD Carry MiSTakE met and befriended Stanley, a Top lane player. Shortly after connecting, their mutual friend colalin introduced to them to NeXAbc and former Counter Logic Gaming player Lilballz. Together with mid laner A8000, they formed Team For the Win (FTW), with MiSTakE as team captain.

Team For the Win's first event was Garena's G1 eSports competition. At the tournament, Team FTW took first place ahead of 150 other teams to qualify for the 2011 World Cyber Games.

At the 2011 World Cyber Games, Team For the Win was unable to make it through the group stage. The top two teams from each group would advance, but with a third place TPA was unable to qualify. They posted a 2-2 record after defeating Team Jantelaget and Orange eSports and losing to NaJin e-mFire and Millenium. Mid laner A8000 left the team after the event.

Acquisition of Team For the Win[edit]

Despite early elimination at the 2011 World Cyber Games, online game distribution company Garena took notice of Team FTW's strong performance and offered to become the official sponsor of the team. On March 9 of 2012, Garena acquired the roster of Team For the Win and renamed them "Taipei Assassins". 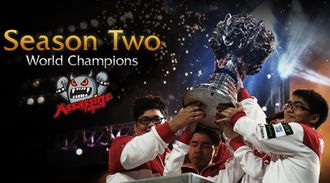 Taipei Assassins competed in the Season Two Regionals in Taipei. In the Round of 32 group stage, Taipei Assassins took first place in their group, going 3-0 by defeating 301英雄聯盟, TeamMarlboroClassicS, and TheCradleOfVictory. Advancing to the Round of 8 group stage, Taipei Assassins once again went undefeated, going 3-0 and taking first in their group, defeating AllLaneCarry, 皮卡丘打毛線, and TheoryOfEvolution. In the playoffs, Taipei Assassins took out MksZ 2-0 in the semifinals and then played a show match with the visiting CLG EU, which they lost. The Assassins continued their streak and defeated Corsair 2-0 in the grand finals, qualifying for the Season 2 World Championship in Los Angeles.

Taipei Assassins participated in the Season 2 World Championship held from October 4 to October 13 of 2012 in Los Angeles. Of the five regional champions (Team SoloMid, Moscow Five, Team WE, Taipei Assassins, and Azubu Frost), four teams, including TPA, were given a free pass out of the group stage based on a random drawing. In the quarterfinals, TPA faced off against Korean team NaJin Sword. Despite being underdogs after NaJin Sword's strong group stage showing, the Assassins were able to come out with a victory, winning both games in dominant fashion. They advanced to the semifinals against heavy tournament favorites Moscow Five. Alex Ich's Evelynn play caught TPA off guard in the first contest and put Moscow Five one game up in the series, but TPA rallied and took the next two games to beat the Russian powerhouse and earned a spot in the grand finals opposite Azubu Frost. The Assassins once again dropped the first game in the set, but Frost folded under TPA's stellar coordination and relentless pressure throughout the next three games. TPA's 3-1 win over Frost not only gave them the world championship and the million-dollar grand prize, but also the honor of being the first team to have their names engraved on the Summoner's Cup (which had not been introduced the previous year, when Fnatic had become the very first League world champion.) Their win was also celebrated not only as Taiwan's greatest moment in competitive League of Legends but as the country's greatest moment in any e-Sport. [1] As is now customary for world champion teams, Riot designed and released a set of TPA-themed skins for each of the champions they played in the deciding Game Four of the grand finals -
Orianna (Toyz),
Ezreal (Bebe),
Shen (Stanley),
Dr. Mundo (Lilballz) and
Nunu (Mistake).

Shortly after the conclusion of Season 2, TPA announced the addition of two more players onto their roster. Zonda was brought in as a substitute for top lane while GoDJJ joined as a second AD player; the changes suggested the formation of a second squad under the organization in the near future.[2]

Taipei Assassins attended the 2012 GPL Season 1 playoffs on November 17 in Singapore. They were seeded directly into the finals of the three team tournament, being the number one seed holding a 38-2 record throughout the regular season. The Singapore Sentinels managed to defeat Saigon Jokers in the semi-finals, setting the stage for a showdown betweem the two strongest teams in the GPL. TPA managed to take the first two games without much trouble, with Stanley constantly split pushing and outmaneuvering the opposition. SGS pulled out an interesting shield strategy in Game 3, with Chawy on Karma in mid lane. The strategy caught TPA off guard, and SGS managed to end the game in a rout of the Taiwanese squad. The Sentinels attempted a similar strategy in Game 4, again acquiring a large advantage early game. However, Toyz turned the tide of the game with a spot-on Orianna ultimate during a close Dragon fight, which decimated SGS and their chances at the title. In the end, Taipei Assassins secured 1st place at the event, going 3-1 and taking home the championship ring.

On November 29 and December 2, the Assassins competed in IPL 5 in Las Vegas. During the group stages, TPA defeated the Thailand hopefuls Blackbean, giving Bebe one of the three penta kills in the tournament. Later TPA went against Moscow 5 in a rematch of the Season 2 World Championship semi-finals. Stanley on Rengar ran rampant on the Russian squad, advancing the Assassins 2-0 into the playoffs. TPA faced a massive upset in Round 2 against FnaticRC, falling 0-2 into the losers bracket. There the Taiwanese team would sweep two series against the Singapore Sentinels and Curse Gaming. Coming into Round 4, the Assassins faced CLG EU. The Europeans won a fast-paced opener and held a clear advantage throughout most of the second game. However, after Bebe finished his core build on Caitlyn, TPA managed to take a team fight and the game. In game 3 the Assassins again prevailed in a long drawn out game, eliminating CLG EU from the IPL 5. TPA then defeated M5 2-0, making it their fifth consecutive win against the Russian team. In the semi-finals TPA was once again outmaneuvered and overrun by FnaticRC, falling 0-2. Taipei Assassins took 3rd place at the event with $7,500 in winnings.

After winning 2012's GPL (the SEA equivalent of the LCS), TPA was invited to the 2013 Spring and Summer split of the GPL.

On January 10, TPA was invited to participate in the GIGABYTE StarsWar League (Season 2). TPA had a good performance in the group stage, going 3-1-1, winning against Positive Energy, LGD Gaming, and Royal Club Huang Zu, while tying against Najin Sword and losing to MVP Ozone. However, they showed a disappointing 2-0 loss against Chinese powerhouse Team WE, and a surprising loss to amateur team Positive Energy, especially after their 2-0 victory against them in the group stage. This unfortunate outcome was directly linked by many people to Lilballz's inability to adapt to the Season 3 jungle meta. TPA eventually finished the Spring Split of the GPL 27-1, losing only 1 game to SGS, which people again linked directly to Lilballz.

On May 18, TPA was invited to play in the NVIDIA Game Festival 2013. As a result of TPA losing 1-0 to Royal Club Huang Zu, TPA decided to start tryouts for new positions for their jungler (to replace Lilballz), although the decision was somewhat indecisive. TPA would, however, pull out a surprising 2-1 victory against OMG, one of the strongest Chinese teams, showing that TPA was still a strong team, despite a recent slump. This eventually led to the decision that Lilballz was to be replaced by their new jungler Sarsky. Since IPL 5, TPA was in the doldrums. Therefore, the team desired to win tournaments, so lots of pressure was made and led to the team playing under a bad atmosphere.

After TPA showing some bad results againts teams in 2013 GPL Summer, Garena announced that Stanley was released from TPA and Toyz retired from competitive League of Legends on June 30, 2013. At the same time, Jay and Achie join TPA to solve the roster vacancy.[3]

TPA lost the chance to go to the Season 3 World Championship after they lost 0-2 vs. Gamania Bears in the lower bracket of the S3 Taipei Qualifiers.