Taipei Snipers was a competitive League of Legends team based in Taiwan. It was originally the sister team of Taipei Assassins.

The first tournament in which TPS participated was GIGABYTE StarsWar League Season 2. The team was placed in the same group as Team WE, Invictus Gaming, and SK Telecom T1. Taipei Snipers placed 3rd in the group and dropped to the Loser's Bracket, where they were defeated by NaJin Sword.

Unlike Taipei Assassins, Taipei Snipers did not join the Garena Premier League (GPL). They instead joined the Taiwan eSports League 2013, where they played against ahq e-Sports Club and four other Taiwanese teams: Wayi Spider, Gamania Bears, e-Sports Dragons Pro, and yoe IRONMEN. Taipei Snipers dominated the league with a 20-5 record. Taipei Snipers then qualified for the Season 3 Taiwan Regional Finals, but placed 2nd behind Gamania Bears.

After the disappointing finish to Season 3, Winds and Awei joined while OhReaL swapped roles from jungle to mid lane. During the 2014 GPL Winter, the team faced off against their sister team, Taipei Assassins, in the finals. They lost 2-3 and placed 2nd overall. Afterward, NeXAbc and MiSTakE retired. 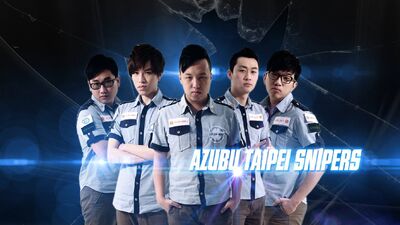