Team Vulcun was a North American eSports Team which formed in February 2013 to compete in Riot Games' Season 3 NA League Championship Series. In October 2013, the team reformed as XDG Gaming.

The team competed under the name Vulcun TechBargains, in representation of their sponsor, TechBargains.

Team Vulcun was a North American Professional League of Legends team that was formed on February 2 2013, after acquiring the roster of Team FeaR. Along with the announcement of the team's new name, they also announced their two subs, ScubaChris and MasteR of LoL.

On May 2 2013, it was officially announced the Team Vulcun would play under the name Vulcun TechBargains in representation of their new sponsor, TechBargains.

During the NA LCS Summer Season, despite a somewhat shaky beginning, Vulcun hit their stride starting middle of the season, becoming a dominant team in the league. They ended the season with a great record of 20-8, placing 2nd only after the dominant Cloud 9, ensuring them a bye at NA LCS Summer Playoffs and their spot for Season 4 Spring season. Vulcun faced TSM in the semifinals but lost 2-0 in the set, sending them to fight Team Dignitas for a 3rd place finish. The team's strong game bested dig, making them the last NA team to qualify for a coveted spot at the Season 3 World Championship.

At the S3 Championship, Vulcun would be placed into a tough group and came out extremely strong, surprising much of the crowd and win their first game against top European seed, Fnatic in convincing fashion. They would be unable to continue strong through the rest of the group stage and finish 4th in the group, not advancing to the Quarterfinals and would end up 12th at the tournament.

It was announced in October 2013 that Team Vulcun would continue playing post-Season 3 but reformed as XDG Gaming. 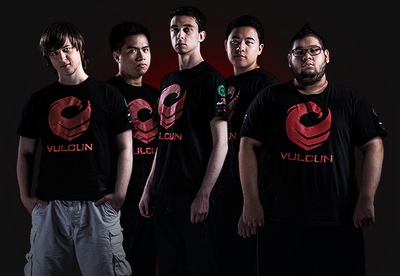