The Journal of Justice/Volume 1, Issue 01

An Open Letter from the Editor-in-Chief[edit]

Senior Summoner Ralston Farnsley
Reporting From The Institute Of War

Welcome, my fellow summoners, to the inauguration of the League's newest journal of news and commentary. Our intent with the Journal of Justice is to bring a unique perspective on the events that shape Runeterra directly to you: the summoners that make up the greatest organization that civilization has ever known.

There have been other chronicles such as this in the past, though they found themselves without such a noble and genuine purpose. Most journals lacked direction and clarity. For too long, we've had to separate the wheat from the chaff when it came to distilling information from our client city-states. With the Journal of Justice, you will receive accurate and thought-provoking information on events both great and small that you need to know about.

Most importantly, through your participation and patronage, you will help guide us in the direction we will take with this journal. Truly, this endeavor will be history in the making. You, the summoners, shape Runeterra's history in the Fields of Justice, and now you will also help to shape it here.

We have taken our first steps on a long journey together. There will be many changes and improvements the journal will undergo during this venture. I, for one, am excited to see where it all will lead us.

Bob Nashahago
Reporting From The Institute Of War

The sleepy, non-descript village of Kalamanda, located near the northern entrance to Mogron Pass, now finds itself wide awake as the leading lady on the world stage. The village's mayor, Anson Ridley, reported this week that a local survey team has uncovered a massive deposit of gold and precious gems within the village's sphere of influence. Furthermore, two nexuses of considerable magic potency have been discovered alongside the resource deposits.

Before the discovery, Kalamanda was only moderately known as a decent place to fish for Valoran trout and not much else. The village now finds itself as the destination point for adventurers and prospectors seeking fame and riches beyond their wildest dreams. The town council has already set up a temporary camp located near the foothills that lead to Mogron Pass and the Great Barrier in anticipation of the great influx of individuals hoping to trade a hard day's work for handsome rewards.

Mayor Ridley has acknowledged that Kalamanda itself is not properly equipped to extract and process the raw riches that lay under the village and its environs. "There's little question that we will be looking to partner with an external mining company or even one of the great city-states in the successful exploitation of these resources," Ridley said. "We are looking to work with partners who will respect Kalamanda's wishes to keep our interests first."

With the discovery of two massive nexuses in close proximity to the valuable resources, the League has also taken an interest in Kalamanda's recent good fortune. Council of Equity spokesman Rovis Samadon downplayed concern about the nexuses' discovery by an organization other than the League. "The League works tirelessly and diligently to identify and maintain control over the nexuses found all over the continent of Valoran."

"With such a magically blessed world as Runeterra is, it is only logical to assume that many nexuses remain undiscovered."

Samadon continued: "The citizens of Kalamanda have done the right thing by not only publically announcing their discovery, but also contacting the League directly about it."

The League has since announced plans to send a research team of summoners and other magicians to Kalamanda to inspect the nexuses for potential future management and use by the League.

DSS Excursion lost to unknown pirates in the Conqueror's Sea[edit] 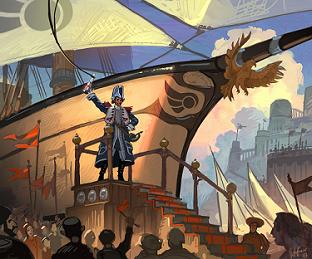 The DSS Excursion - a cargo sloop of the Demacian Navy - has been reported lost at sea, an apparent victim of piracy. All hands aboard are currently missing, and no demands have yet been made of the Demacian government for their return.

The Excursion was bound from Freljord to Demacia laden with unspecified trade goods, according to a spokesperson for the Demacian Navy, when audiopathic contact with the sloop was ultimately lost. After twenty-four hours of communications silence, rescue vessels were dispatched to the Excursion's last reported location.

The Demacian investigation of the ship's disappearance - led by Demacian Captain of the Guard and Champion of the League,

Further divination did not reveal the identity of the perpetrators of the attack, though it was gleaned that the attack occurred at night when most of the Excursion's crew was in their quarters. The investigation has further revealed that magic above maximum potency as dictated by the League was used in the attack, and necromancy is believed to have been used based on the evidence divined.

As a result, the League has dispatched a team of investigators led by League Champion

Kayle, the Judicator. "We will be working alongside Demacia in their continued investigation," Kayle said. "Piracy in all forms affects every city-state; only together, through the shared benefits of the League, can we crush such lawlessness."

Necromancy is known to be permitted as a magical study by only two of Valoran's city-states: Noxus and Zaun. While the League has not banned the use of necromancy throughout the continent, it is noted that such magic is potentially dangerous when misused even slightly. Extreme caution is advised when dealing with such magic. The League does not sanction the use of necromancy, and the study of necromancy and the manufacture of necromantic items are not allowed within the Arcanum Majoris.

Representatives from both Noxus and Zaun have denounced the attack, though Noxian League representative

Garen, when asked about the Noxian response, shot back at his Noxian counterpart. "It is no surprise to me or anyone familiar with the magical atrocities commonly used by rogue forces like Noxus that necromancy was involved in this pirate attack. Rest assured that Demacia will stop at nothing to uncover the truth behind this act of unprovoked villainy. The perpetrators will be brought to justice."

All the latest gossip on the champions of the League![edit]

Ram Steed
Your Eye Inside The League of Legends

Well now! Things are certainly heating up in the League - or cooling down if you're one of the unfortunate. These past two weeks have been quite the time for some of our favorite champions. Let's take a look and see who's hot and who's not!

It's always the exotic beauties you have to watch out for, and

Evelynn is a champion who embodies that to the fullest. Many men have fallen prey to her allure - or simply fallen prey. Perhaps the most recent and unbelievable was that gypsy rogue, the huckster they call

The pair was first romantically linked earlier this year when they appeared together at the opening ceremonies of the Zaun Glowlight Festival. They were spotted once again at the League of Legend's Fan Appreciation Celebration. That's not to mention the many occasions this reporter has found them out for a quiet night together... but it appears that the pair does not see eye to eye.

"Our time is pleasant," said Evelynn. "But it is nothing serious. Nothing lasts forever. Well, almost nothing."

Twisted Fate's feelings were clearly in a different place. "I'm a man who believes in keeping his options open. But sometimes you've got to take a chance, and that blue-skinned beauty is worth gambling on."

Sources close to the couple have claimed that vicious battle arena fighting on opposite teams has taken its toll on their relationship - and on nearby city streets outside of the Fields of Justice. It seems likely that Evelynn will once again eat the heart of her lover, creating yet another eligible bachelor in the League.

Gragas may be the hardiest brewmaster of the foothills, but he's also the rowdiest rouser of the rabble! This past Thursday night was no exception. Following a successful battle arena match, Gragas took to his usual night of celebration - this time at the Lamplighter Inn in Noxus' famous Vexallian Square.

Those present say that Gragas arrived with his friend and fellow champion,

Jax. They began drinking at approximately 8:30 pm. At 10:30 pm, they were buying rounds for the bar. By the stroke of midnight, twelve chairs had been broken, as had one window, five bottles, three arms, and a handful of teeth. Furthermore, two waitresses claimed to have had their buttocks inappropriately fondled! Jax supposedly disappeared earlier in the night, whereas Gragas fled towards his beloved hills before the Noxian constabulary arrived at the Lamplighter.

After a cursory investigation, Noxian officials decided to drop all charges. Sergeant Willem Nightshade of the Noxian Constabulary had this to say:

"As a League Champion who has committed no crime against the state proper, it is unlawful for us to ban him from our borders. Honestly now, the trouble only starts when the barkeeps stupidly serve him too much to drink. It's their risk if they let him in and give him endless refills on alcohol. What did they expect would happen?"

Nightshade offered this as advice for wary barkeeps in Noxus: "Next time, they should try watering down his drink. On the other hand, that might just rile him up more. Anyway, just consider the risks when serving alcohol to someone whose nickname is 'The Rabble Rouser'!"

One thing is for certain: if this reporter sees Gragas coming into his favorite watering hole, he'll be heading for the door!

As always, yours truly will keep on the look-out for the juiciest Champion news. Who knows what they'll be up to next!

Piltover prodigy donates artifact to the Institute of War[edit] 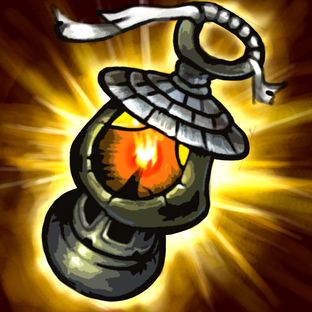 Piltover Master Pathfinder and Champion of the League,

Ezreal, recently returned from a successful archeological expedition to Kumungu, the mysterious jungle region located beyond the Great Barrier, deep within the southern half of continental Valoran. "Kumungu is a dangerous place for most, but danger is of no concern to me," Ezreal announced during a special presentation to the Arcanum Majoris, the League's scholastic branch based in the Institute of War. "New expeditions (to Kumungu)? Count on it."

During the event, Ezreal stunned the assembled scholars by unveiling and donating an

artifact he discovered during his expedition. It is expected to be sanctioned for use in League matches once the object can be duplicated and its duplicates are fully tested in the League's Public Trials and Resolutions battle arena.

To the untrained eye, the artifact may appear to be merely a mundane lantern. "It's much more than that," said Professor Alowicious Chucat, Lead Archaeologist for the Arcanum Majoris. "Upon closer examination we discovered a name etched in the base of the Lantern." Indicating the weathered engraving of the name Wriggle, Chucat continued, "It would seem that this was an important artifact for whoever originally owned it. Judging by the bladed edges on the bottom and the well-worn handle, it has definitely seen combat. I surmise that it was likely used to ward off predatory animals native to the region. It is definitely a tool specially crafted for jungle navigation."

Scholars universally agree that Kumungu could hold a wealth of valuable artifacts. Unfortunately, the dangers associated with such a savage and mysterious realm have not deterred a recent rush of amateur explorers to the area. Subsequently, the League has issued an advisory against such expeditions. "Most who fancy themselves adventurers or archaeologists are in fact neither," Chucat further commented. "Many who hear of Ezreal's exploits think they can do something similar. It is important to remember that not only is Ezreal a League champion, but he is also the lead explorer for a city-state. Leave dangerous exploration to the professionals."