The Journal of Justice/Volume 1, Issue 14

Miners’ fates unknown as mithril mine collapses from recent earthquake[edit] 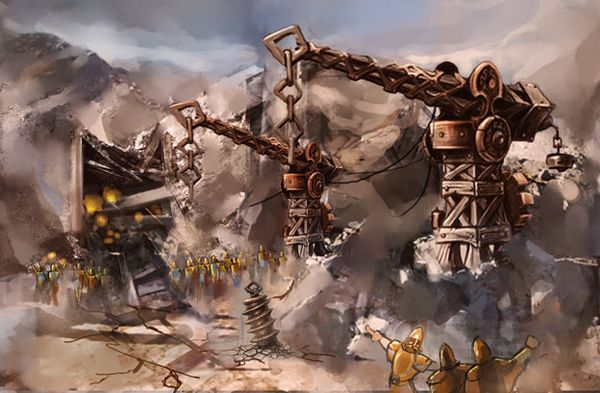 Rescue parties rush to save the trapped Demacian miners in Kalamanda.

An earthquake rocked the village of Kalamanda yesterday evening, causing the collapse of a mithril mine and trapping twelve Demacian miners underground. Rescue efforts began shortly after the mine caved in, though no announcement of progress has been made by the village. No other damage in Kalamanda was reported.

The collapse occurred during the early morning work shift at the #1 Loadstone Mining Consortium (LMC) mine, which is the site of Demacia’s primary mineral extraction operation in Kalamanda. Reports from miners who narrowly avoided the accident indicate that there was initially a low rumble that rapidly grew louder emanating from deep within the mine. Shortly after the rumbling started, the main mine shaft began to shake, and it eventually collapsed. The fates of the twelve miners still trapped underground remain unknown.

The tremor also released huge pockets of magical energy into the atmosphere, prompting immediate concern that the area is rapidly becoming unstable. League officials descended upon Kalamanda en masse, studying the causes and effects of the catastrophe. Finger pointing began immediately across Valoran; rumors that the quake was caused by the rampant influx of unregulated mining operations and environmentally unsafe mining practices by Zaun have been raised, along with wilder accusations that the quake was deliberately triggered.

The Loadstone Mining Consortium is a mining company owned in part by the Demacian royal family. It had just conducted safety inspections of all its facilities in Kalamanda before yesterday’s events. “There is no reason whatsoever that the #1 mine should have collapsed at all,” commented Winston Garnersham, chief overseer of the LMC’s Kalamanda operations. “Although the earthquake was unpredictable, the magnitude of the shock was not great enough to cause a collapse. That mine checked out across the board; were it even remotely unsafe, we would have shut it down. We are not in the business of risking the lives of our employees for profit.”

The League has offered assistance to Demacia in its rescue efforts, as have the small contingencies of Piltover and Ionia. Help has even been offered by the Noxian delegation in Kalamanda – a surprising move considering the animosity between Demacia and Noxus in recent years.

Katarina, champion of the League and the Noxian High Command’s representative in Kalamanda, issued the following statement in light of the accident: “Our well-wishes go out to the miners who are currently fighting for their lives in the collapsed Loadstone mine. Such business is dangerous, especially when companies may be tempted to risk the lives of others in unsafe working environments. In the future, Noxus would be willing to share the expert safety practices of Noxian mining operations with the other city-states working in Kalamanda.”

The vast mineral wealth uncovered last year in Kalamanda has been steadily exploited by city-states and independent miners alike. Demacia and Noxus are the two city-states with the largest presence in Kalamanda, with both setting up military outposts near the village. The village’s elders have stated in no uncertain terms that they are looking to establish an exclusive contract with a single city-state for future mineral exploitation, though no final decision has been made in that regard. Both Demacia and Noxus are thought to be the leading contenders for securing exclusive mining rights in Kalamanda.

Kassadin is on the run after a failed attempt to prevent a sacrificial ritual, resulting in a major blackout within Zaun. According to witnesses, he discharged Void energy in an attempt to save a young woman from being sacrificed at the hands of fellow League Champion

Malzahar. The energy was sucked into a hexvein conduit feeding into the nexus powering the southern district, causing extensive damage that will take Zaunite techmaturgical crews several days to repair.

Malzahar’s presence in Zaun attests to the existence of a growing subculture of Void worshippers. The self-proclaimed “prophet” is still met with intense skepticism, however, with Valoranian leadership equating his bodements to nattering gossip.

Despite his extremist views, Malzahar has found an audience. He appeared in Zaun’s southern district this morning with several hundred cultist followers, chanting in an unknown dialect. The gathering quickly escalated into a rally of both void worshippers and protesters alike, with the Prophet floating above a hexvein power node in the center of the crowd. Onlookers say the group soon carried a bound young woman out to Malzahar, over whom he initiated a sacrificial spell and caused his dagger to magically levitate above her.

It was at that moment that Kassadin abruptly materialized, dressed in full League regalia. He activated his sword and pointed it at Malzahar. A participant at the event, who refused to give his name, recorded the exchange between the champions. We transcribed a portion of it:

Kassadin: “Malzahar! Get away from her! She is not yours!”

Malzahar: “Brother! Enlightened Walker of the Path! Join us!”

Kassadin: “Don’t patronize me, mage! You threaten the balance! Let her go!”

[Another pulse sound, a woman’s scream, and a small explosion]

Malzahar: “See what you’ve done! This is your doing!”

Our source described what happened: “It all happened very fast. Kassadin appeared just like Malzahar said he would. The blast that Kassadin sent toward the Prophet seemed to pull itself to the dagger instead. When it hit, the dagger glowed and cut a hole open into the air. Like lightning, a shadow grabbed the woman and dragged her in. She disappeared! The explosion as the hole closed was what destroyed that power node.”

Reports say the Void energy explosion was not large, but the close proximity of the power node caused it to absorb the majority of the blast. A purple glow flowed down the conduit, causing fluctuations as it reached the nexus. Zaun Security Supervisor, Rhoman Plath, made a statement soon after:

“Void Cultists are a crock, to be frank. We will be looking into the incident, but sadly, the death of one person is not news here in Zaun. We are in pursuit of Kassadin, seeing as he is the culprit behind the blackout. Unfortunately, as my men have informed me, he is nearly impossible to catch, so we hope he will come forward of his own volition. As for the victim’s identity, our initial investigation has suggested that this woman may, in fact, be Kassadin’s daughter.”

It Takes Time to Win-d[edit]

Janna publicly unveiled her new record-breaking zeppelin at Piltover’s 16th annual Festival of Flight. While it is difficult to classify any dirigible as small (with the usual dimensions far exceeding that of many of Demacia’s great spires), the appropriately named “Tailwind” aircraft has a record-breaking length of 27 meters, and strikes an impressive profile with its gleaming gold-trimmed wingspan . It steals the title of smallest operating airship from Zaun’s prized “Lead Zeppelin”, which measures in at 39 meters.

Not only is Tailwind the first zeppelin to meet such small size constraints, but it also pioneers the utilization of Piltoverian Chrono-Technology. The new prototype “Chrono-propeller” engine, which has received tremendous design contributions from fellow League Champion

Zilean, is rumored to manipulate time itself to reach speeds that would otherwise be impossible under Valoran’s constantly changing atmospheric conditions. Piltover scientists offered very little information on the specifics of the design, but they did comment that it would be decades before the technology was perfected, and also that they are grateful for Janna’s participation in testing the new design.

Tensions between Piltover and Zaun have renewed as the first race marking the beginning of the annual Techmaturgical Conference draws near. The city of Zaun, having been named victor of the symbolic event for the last four years running, showed a great deal of trepidation towards the upcoming match after the unveiling of Piltover’s new secret weapon. The Tailwind will be piloted in the race by Janna, who was once one of Zaun’s most promising mage talents before defecting from the city-state several years ago.

The starting point for this year’s race will be in Piltover, lending a greater advantage to the City of Progress. The course will direct the contestants to Zaun, where they will then circle the entire perimeter of the city before returning to the docking pier at the top of Piltover’s central spire. It is commonplace for the victorious city to celebrate for several days before returning to its normal functions, and it is said that the last Piltoverian victory celebration was so loud that the cheers could be heard from within the walls of its rival city.

As Runeterrans settle into the 21st year of the Common League Era, we look proudly toward the beginning of the third decade since the League’s origination. It seems we’ve been afforded the luxury to take for granted a world without war raging across its lands. How soon since we faced the brink of annihilation can our concerns surround the day-to-day affairs of our favorite celebrities, the champions of the League of Legends.

“Two champions bring me the most inquiries when I do happen to go about town, including from myself. The League has many oddities, but the most odd indeed are

Amumu, by far the youngest champions I have seen, or, in Amumu's case, youngest upon death/undeath. I was wondering if these two interact on a regular basis, both being children?” – Krallna

As two champions known for their terrifying raw power on the Fields of Justice, Annie and Amumu have surprisingly genteel demeanors in their daily lives. I figured it best to take your query straight to Annie, as Amumu is currently visiting Bandle City to be re-bandaged:

“Amumu is my favorite champion. He’s never mean like some of the others, and he is always willing to make friends. We play sometimes after matches. I like him very much. I hope he likes me too! I guess everyone thinks he’s gross because he’s undead, but they never say that in front of Tibbers.”

“With the recent liberated provinces of Ionia many Ionians, champions and summoners have breathed a sigh of relief that Ionia is once again whole. Being a role model to me, I was wondering if

Master Yi would be willing to comment his thoughts on the recent liberation of the Ionian provinces?” – J.R Kishi, Ionian Summoner

As homage to Ram Steed, who we are very happy to have with us still following his ordeal with

Shaco, I’m happy to bring you this response straight from the source – Master Yi.

“The path to enlightenment is littered with trials, and it is in these times when we may discover who we truly are. To a warrior, however, relief is an emotion as distracting as panic. Noxian or otherwise, the forces we now face have ebbed, but just as the tide, they will flow again.”

“I have spent many fights where I have decided to summon

Alistar as my champion. After spending so long with this great warrior I had to start wondering if he has ever tried to contact others of his race or vice-versa. I hope he can find a home someday and would even like to see more of his savage yet noble kind in the League.” –Summoner IronThane

Despite his fame and hulking physique, Alistar avoids the spotlight quite effectively. I was only able to borrow a couple moments of his time in the Adjudication Wings after a match before he set out from the Institute in quite a hurry.

“The minotaurs of the Great Barrier live on, that’s enough. I cannot contact them for fear that Noxian agents will follow me. For now, I worry only for the minotaurs still imprisoned in Noxian camps. I hope that their will remains unbroken. Like the Ionians, we will one day show Noxus how powerful the spirit of the minotaur tribes can be.”