The Journal of Justice/Volume 1, Issue 29 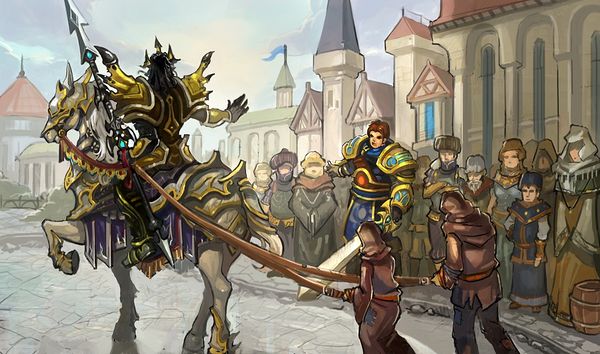 Prince Jarvan IV orders Garen away as he escorts two prisoners into Demacia.

Early this week, the

Crowned Prince made his first appearance in Demacia since the conflict in Kalamanda when he was seen escorting two prisoners into the city. Jarvan IV was greeted at the castle gates by

Garen Crownguard, who offered the prince his assistance but was commandingly turned away before the gathered crowd.

"His arrival was completely unannounced," said Vel Karris, a Demacian guard on duty at the city's eastern gate. The prince reportedly arrived on horseback and had two hooded prisoners with him, but was otherwise alone. He informed the guards that he was escorting the prisoners to the castle dungeons. "The prince was very clear that no questions were to be asked."

Jarvan IV rode immediately towards the castle. His unexpected arrival gathered a considerable crowd. Since the events in Kalamanda, the prince's situation has been a subject of concern in Demacia, and citizens were considerably reinvigorated by his return. Despite the warm reception, the prince did not stop to acknowledge his citizens. Garen Crownguard, having been informed of the prince's return by the Demacian Guard, prepared to meet him at the castle gates.

However, when Garen broke through the crowd, Jarvan IV ordered him to halt.

Onlookers report that the prince informed Garen that his assistance was unnecessary. Garen protested and stated there was "much to discuss," but Jarvan turned him away. Garen questioned Jarvan as to the identity of his prisoners, and though the gathered crowd echoed his curiosity, Jarvan replied with this statement: "This is the business of the crown. Your loyalty is appreciated, Garen, but the Dauntless Vanguard has no place in this matter. Stand down."

Garen complied with his prince's command and withdrew from the gates. Following the confrontation, Jarvan IV entered the castle with the prisoners. Since his appearance early this week, the prince has not been seen outside of the castle's walls, and the nature of the prisoners' arrest has not been disclosed to the public.

"Much of the weight of the situation following Kalamanda has fallen onto the shoulders of the prince," stated Garen when questioned about his confrontation with Jarvan IV. "It is not my place to question his orders. I am certain that Jarvan has reasons for his actions and that all will be clear in time. Demacia stands resolute behind the crown."

Kaldera Carnadine
Reporting From The Institute Of War

Officials at the Institute of War detected an

enormous magical disturbance south of the Great Barrier early last week. A dispatched team of investigators found a tomb unearthed by a massive explosion in the Shurima Desert, where the disturbance is suspected to have originated. The source of the explosion has yet to be determined.

"Magical disturbances south of the Great Barrier are not at all uncommon," explained League Representative Mycroft Zimmer, leader of the investigation. "But this stood apart from the rest. The disturbance was immense—our detection devices nearly went haywire." With such powerful readings rare and often implicative of danger, the Institute immediately dispatched Zimmer and his team to investigate.

Utilizing a Piltovian zeppelin, the team crossed the Great Barrier and arrived in Shurima two days after the initial disturbance. Zimmer kept field equipment on hand, noting that the detected magical energy decreased significantly after its initial spike. The residual energy was enough to lead the team to the location of the disturbance, however.

"We flew over what appeared to be the site of a massive explosion. We could see the crater from a mile away," explained Runaan Eversky, Zimmer's second-in-command. "The explosion wiped out what had previously been the site of a cluster of Shurima's ruins, but it unearthed a tomb we never knew existed."

Investigators discovered the highest concentration of residual arcane energy within what remains of the unearthed tomb. Though speculation amongst the team is rampant, Zimmer's men were unable to discover anything to identify the cause of the explosion.

"None of the artifacts we found in the tomb tell us what actually happened there," stated Zimmer. "But none of it should be taken lightly. The tomb contained statues with their arms and legs bound. We have not fully translated the markings on its shattered stone walls, but early reports indicate that they tell the story of some kind of crime."

Zimmer's team returned to the Institute of War with some of the artifacts for further study. They have since remained on high alert, monitoring their equipment for any signs of further disturbances. "We have a lot of theories,” explained Eversky. “The most likely explanation is that someone used a great deal of magic to break open the tomb in order to rob from it—but it really could have been anything.”

Warehouse in Zaun Revealed to be Corporate Prison[edit]

An unassuming Priggs Industries warehouse in Zaun was discovered to be a corporate prison early this week when a breakout from within revealed a secret entry point. CEO Dr. Priggs has since vanished while rival corporations led by Edward Manfred push for an investigation.

The commotion began Tuesday night when Edward Manfred was overseeing a routine inspection of his own warehouse next door. "I heard an explosion from Priggs' warehouse," stated Manfred. "It was only natural for me to investigate, of course." Manfred reportedly entered the Priggs warehouse to witness an

unidentified man grappling with a pair of guards. "I couldn't make out much of him. He was a big, grizzled man. He threw a smoke grenade of some sort, and when the haze cleared, the two guards were unconscious and the man had gone."

Manfred was the first to discover a passage to an underground holding facility that had been blown open from within from a dynamite blast. Inside was what appeared to be a prison, but one cell was empty. The other five prisoners, however, were quickly released.

One of the prisoners was discovered to be Falren Danart,

whose disappearance and assumed death three years ago was thought to be the cause of his father's failed management and subsequent bankruptcy of the famed Danart Chemicals,a once-rival company to Priggs Industries. With Falren's freedom, however, Danart immediately came forward to state that he was blackmailed following his son's capture and imprisonment.

"Many of the other prisoners tell similar stories," stated Edward Manfred. "Most of them were, in some way, a rival to Priggs or had wronged him in one way or another. In any case, Dr. Priggs's method of dealing with corporate rivalry goes against the very spirit of competition that defines Zaun as a city-state! Certainly this merits further investigation."

As this information has become available, the estimated value of Priggs Industries has plummeted in Zaun over the past few days. Other warehouses under the Priggs name have been searched, primarily by forces under Manfred, though no other holding facilities have been discovered. Production at Priggs factories has all but shut down as employees are questioned. Dr. Priggs himself, however, has vanished from the public eye.

"I assume he's on the run," Manfred commented. "Most of his prisoners, including the man who executed the breakout, haven’t been seen since their release. I'm certain at least some of them were waiting for the chance to chase him down."

Summoners, this week, we celebrate a grand occasion: the Crystal Scar, the League’s newest Field of Justice, has opened. With this new Field of Justice comes an entirely new set of challenges that will test our mettle as summoners. We must learn new strategies and new ways to take advantages of our summoned champion’s strengths—and the weaknesses of our opponents. Summoners, take to the Field—the Crystal Scar awaits! 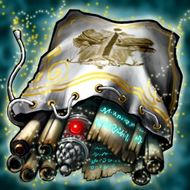 Skarner's race will affect the League's use of Crystal Scar? If the magic from the Noxian and Demacia conflict was enough to awaken him, wouldn't the continued and heavy use of magic in the Crystal Scar bring more of Skarner's people to the surface? – Summoner Tirion Narson

Your concerns are not unmerited. After Skarner was unearthed in Kalamanda, the League feared that the construction of the Crystal Scar would indeed disturb his fellow vanguards. However, Skarner has reassured us that he does not believe the magic from the battlefield will be able to penetrate deep enough into the earth to awaken any of his fellows, as the magic of the Crystal Scar will be much more heavily controlled and contained by the nexuses than that which was unleashed during the conflict.

Skarner’s appearance and the knowledge he has granted us concerning the Odyn Valley did indeed grant us insight into something that has become a part of the League’s newest Field of Justice. At the center of the Crystal Scar, League Field Architects unearthed two massive, magically-charged crystals. These crystals were discovered to be connected to Skarner’s race, the bracken. With Skarner’s assistance, we were able to tune the power of these crystals to grant champions a powerful boon for use in battle on the Crystal Scar.

I would like to take this time to ask a question to our most esteemed and newest member of the League of Legends Champions roster,

Riven. Rest assured, this will not delve into your past history, and if it does, it is not my intent. I have noticed that your right hand comparatively to your left is much bigger, and fitted with an arcane gauntlet of sorts. Do you use this to magnify the strength in your hand and arm so you can wield the mighty sword you use once fully formed? – TechnOkami

Since her Judgment at the Institute of War, Riven has kept to herself despite her newfound status as a champion of the League of Legends. Though she has been the subject of a great deal of attention, she has been resistant to responding to interview requests, but the Exile found your question to be non-invasive and simple enough to offer an answer:

“The gauntlet does nothing to increase my strength by any magical means—strength must come from within. It is a remnant of the armor I have possessed since my time in the service of Noxus. Like my blade, it is a reminder of where I came from.”

I am constantly noticing that

Heimerdinger's Techmaturgical weaponry starts to drop off in power. Could this be, because of some withering effects through the summoning? Is our beloved Yordle mastermind aware of the slowly constant drop off his beloved inventions suffer? I guess it would be stupid to ask if he is working on improvements, but I’m hoping for some insight. – Master Cen

The Revered Inventor has been busier than ever as of late attending to affairs in Piltover. The Yordle Academy of Science and Progress has just begun its fall semester, and Heimerdinger is, as always, vigilant in remaining on site for a few weeks to welcome new students. On top of that, Piltover Customs has seen an increase of business as well over the past few weeks. The Revered Inventor hardly had time to spare a word in answer to your question:

“Yes, yes! I may have been negligent in my upkeep of the devices designated for the Field of Justice—I defend that they are as effective as ever, even with the slightest buildup of rust! I will find the time to tinker with them soon—yes, soon!—and as with every tune-up, I will invariably find room for improvement!”