Velocity eSports is a North American esports organization that was founded in March 2013 around their League of Legends team after their departure from the Dirt Nap Gaming organization.

Velocity eSports was formed in March 2013 after the original lineup left the Dirt Nap Gaming organization. The remaining members felt, due to several roster changes, that they needed a new image to portray them.[1] Their first tournament appearance was in the 2013 MLG Dallas Summer Promotion Tournament.

On Week 5 of the NA LCS Summer Season, ecco moved from Sub to become the Mid laner, moving Vileroze to Top Lane and Cris to Sub. On Week 8, Vileroze announced that Top Lane wasn't working out for him and quit the team, moving Cris back to Top Lane, the team went on to have a 1-2 record for the week.

The Summer season in LCS was not great for Velocity, even though winning their first game in a convincing fashion but were left throughout the season with poor performances. The roster changes did not help the team to adjust and they would eventually end the season last place with a record of 5-23, still able to keep hopes alive for Season 4 to win their spot back in the Spring Promotion.

In September, it was announced that ecco would leave the team as their mid laner, having Velocity change their roster by moving frommaplestreet to mid and picking up new player Slackoh for AD. After executing this roster change, Velocity eSports took part in the North American Challenger League, with two fellow LCS teams up for relegation, Team Curse and Team Coast, as well as 7 of the top Challenger teams in North America. The new roster changes, however, didn't prove to be enough to help the team break their losing spell. Velocity had a disappointing showing in the NACL, sitting in last place 7 weeks in with a record of 5-15. In mid-November, news broke that Velocity would be releasing their entire roster, citing that both the management and the players were tired and frustrated of being unable to "win consistently on any stage" they competed in, and that some of their members were at the point where they would rather quit than continue to lose.[2]

Following the release of the Velocity eSports roster, it was announced that Denial eSports.East would temporarily stand-in for Velocity for the remaining matches of the North American Challenger League.[3] Although it was stated that Velocity would be finding a new group of players to represent the Velocity brand in the upcoming relegation tournament, speculation immediately started about whether or not Velocity would sell their spot in the North American LCS to a different organization. Heated debate followed on Reddit, with a rumor spreading that Evil Geniuses had purchased Velocity's North American LCS spot, and that they intended on transferring the majority of their current roster to a new "EG.NA" team, with a few members staying behind in Europe for the formation of a new "European Superteam", which had already been rumored for quite some time.[4] Sure enough, the rumors proved to be true. One month after the release of the Velocity eSports starting roster, it was announced that Snoopeh, Yellowpete and Krepo of Evil Geniuses would be transferring to Velocity, being joined by Pobelter, formerly of Team Curse, and Innox, formerly of Napkins in Disguise. It was also stated that the Velocity eSports brand would be changed to the Evil Geniuses brand, effectively importing EG from Europe to North America. As an organization is forbidden from owning more than one team in the League Championship Series, regardless of region, the team holding the Evil Geniuses spot in the European LCS will compete under the name Alliance, an organization with strong ties to Evil Geniuses, both brand names being owned by the same person.[5] 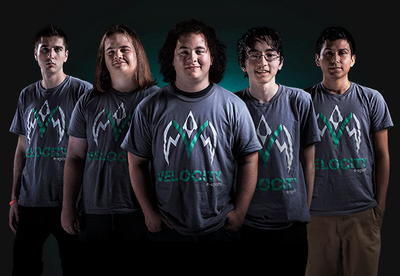