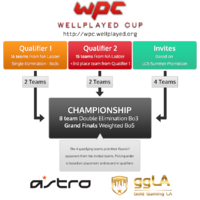 $ 2,000 US Dollars are spread among the teams as seen below:

Converted prizes calculated with values provided by http://www.xe.com on June 5, 2013, as follows:

The WPC will offer an online PayPal form for viewers to tip money to the tournament. Tippers enter in a dollar amount and adjust how much of it they want to go to the Championship prize pool, casters, and/or WellPlayed.

1 Wazabi Gaming replaced The Salad Bar, who were originally invited but withdrew from the tournament May 30.
2 Qualified as DJ BRUNCHKO Chauace
3 GrindHouse Supremacy replaced UBC eSports
4 Denial Esports acquired the roster of DoubleBuff

1 The Dojo couldn't get their fifth player or a sub, so they had to forfeit their match.
2 The roster of DoubleBuff got picked up by Denial Esports.